A world-class horticultural exhibition space, with the biggest wall of live plants in the Southern Hemisphere, has opened in the Botanic Garden. 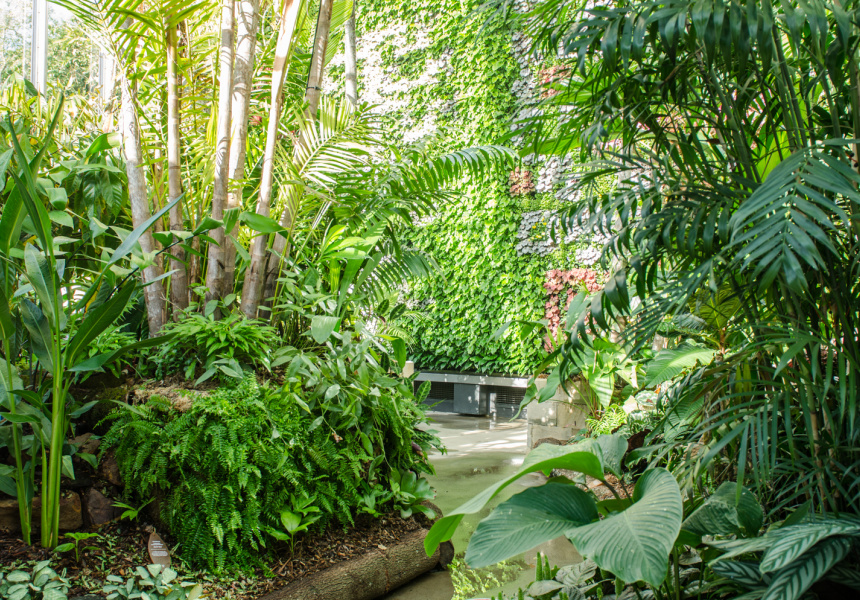 Sydney’s Royal Botanic Garden has a spectacular new exhibition space. The Calyx is an oasis for plant-loving tourists and locals in the heart of central Sydney. The $17 million centre is in effect a stunning birthday present for the Royal Botanic Gardens’ 200th birthday this year.

The Calyx’s design by PTW Architects, McGregor Coxall and builder Cockram Constructions was inspired by structures usually found in a garden: arbours, trellises and frames. Its name is similarly derived from its botanic setting: “calyx” is a horticultural term describing “the sepals of a flower, typically forming a whorl that encloses the petals and forms a protective layer around a flower in bud.”

The circular building is constructed from stainless steel and glass, robust materials that will survive the rough and tumble of very large trees coming in and out for exhibits.

A key part of The Calyx’s is its flexibility – it can be reconfigured for different shows. Troy Uleman, project director of PTW Architects, says as experienced designers of galleries, the team understood that the building needs to “get out of the way” of the exhibitions it houses.

“The star of the show is the horticultural displays,” he says. The exhibition building should be “a serene element that sits in the background, not something that shouts out too loudly.” Uleman says The Calyx is intended as the jewel in Sydney’s front garden. “It was important to us to get it right,” says Uleman. “The expectations of the public are quite high.”

The Calyx adjoins the existing Arc Glasshouse, designed by the renowned Australian architect Ken Woolley, who passed away in 2015. The inaugural exhibition is Sweet Addiction, a botanical tour of the history of chocolate. The show begins by examining chocolate’s origins in South America’s tropical rainforests and finishes in a decadent chocolatier room where visitors can sample the much-appreciated final product.

The Calyx is like a Broadway for plants, says Turner. “Sweet Addiction is our first show – complete with lights, sounds and a few surprises along the way.”

Sweet Addiction at The Calyx runs until April 2017.