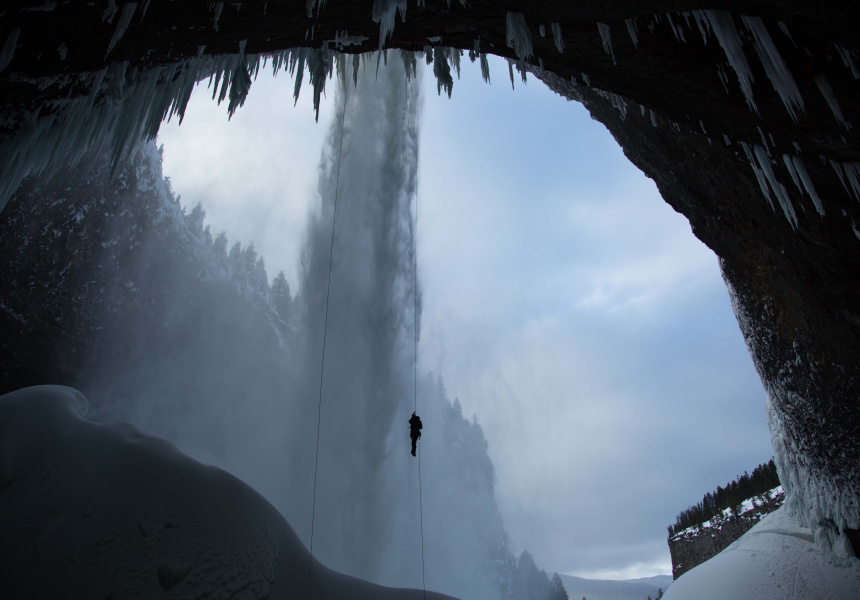 For Bryan Smith, learning to make peace with failure is the first rule of adventure filmmaking. In 2007, the former pro kayaker, who has spent the past decade scaling cliff faces, navigating remote ice-climbing routes and capturing the world’s most treacherous locations on film for National Geographic, began the inaugural descent of Peru’s Río Huallaga. It’s a river in a province of the Amazon known for steep rapids and the presence of The Shining Path, a band of guerilla insurgents prone to brutal violence.

“We failed epically,” Smith says. “We were about five days into the river. We realised we couldn’t go in any further and it took another four days to get out of there. It made me realise that if you don’t fail every once in a while, you’re probably not pushing yourself hard enough to try different things. I think if you’re never failing at anything you’re either really lucky or probably not at the edge of whatever it is that you do.”

Smith first realised the power of filmmaking when he made a documentary about a hydroelectric dam that threatened rivers in his home state of British Columbia. It showed him “the edge” isn’t just good for an adrenaline rush – it’s also rife with storytelling potential.

Smith has filmed alpinist Dean Potter fly off the Yosemite’s El Cap, captured explorer George Kourounis’ plunge into a fiery crater in Turkmenistan and kayaked Russia’s Kamchatka Peninsula. Across all of these projects his hairpin angles and dizzying close-ups belie a deeper talent – the ability to walk the line between narrative ambition and razor-sharp survival instinct.

“Filmmaking is only one part of the equation,” says Smith, adding that fear is one of his greatest assets. “You need to ask yourself: can I hang 3000 feet off the wall and feel comfortable, can I paddle rivers, can I survive big hikes? When we get into the field, we’re 100 per cent focused. You need to put equal work into understanding how to exist in those environments and if you master that, filming isn’t a problem. But if you aren’t comfortable where you’re operating, then you have no ability to tell the story.”

Smith believes sensitivity is as much part of his arsenal as daring. When he was in Turkmenistan to shoot Crater of Fire, a National Geographic documentary that aimed to shed light on the country’s mysterious Darvaza Crater, restraint helped him get a closer glimpse of his subject.

“Turkmenistan is really interesting, because they don’t [usually] allow cameras into the country. In places like that, you have a lot of power. If the government doesn’t like the way they get filmed, they’ve been known to erase villages,” he says. “When you go into these places with your camera, you need to get your job done, but you also need to have a very intimate respect for the people and understand the impact you have on the place. Smith says his most memorable experiences are ones that blend storytelling, conservation and physical challenge. Such as during a 2010 expedition when his team traced the links between river ecosystems and the survival of wild salmon in Russia’s remote Kamchatka Peninsula.

“Because we were able to paddle those rivers, we could collect scientific data. And because of that, we could tell a bigger story about wild salmon that combined adventure and science. Any time all those aspects come together, you know it will be amazing.”

Bryan Smith presents a behind-the-scenes look at filming the Earth’s most challenging environments: