Off Broadway: A Provocative, Entertaining and Slightly Deranged Show 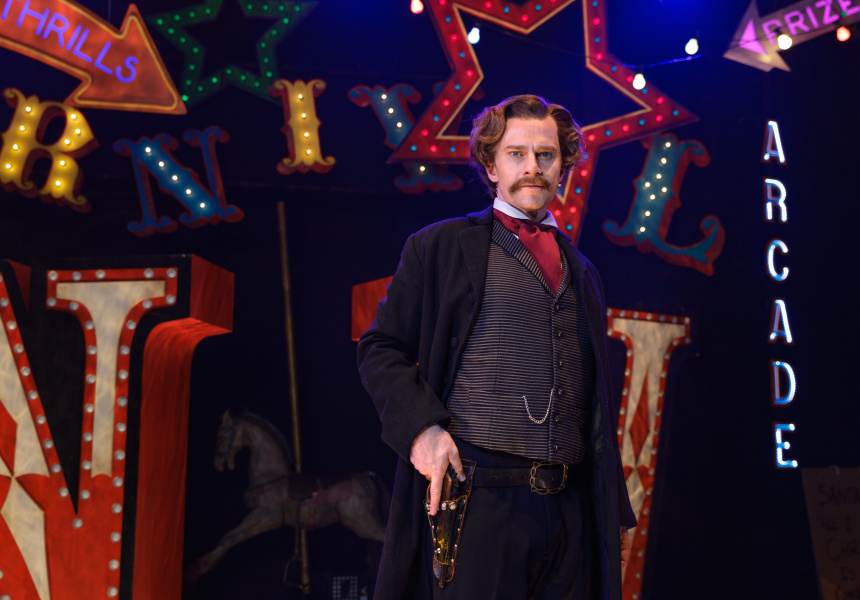 How many times in history has someone attempted to assassinate a US President? Were any of the assassins women? Imagine the conversation if you somehow brought these hit people together, under one roof.

A triumph when it premiered off-Broadway in 1990, Assassins went on to earn five Tony Awards. Following critical success during its Australian debut in Sydney’s own “off-Broadway” theatre, Hayes Theatre Co in Darlinghurst, it is now moving into the Sydney Opera House for a season on the main stage.

Assassins, set in a derelict fairground and this time starring Helpmann Award-winning singer David Campbell, brings together some of history’s most notorious names: Lee Harvey Oswald, John Wilkes Booth and Sara Jane Moore among them. In a twisted interpretation of the American Dream, nine historical assassins are encouraged to join “a game” where the aim is to shoot the President of the United States. The prize? Eternal happiness.

Set and costume designer Alicia Clements and director Dean Bryant collaborated on the garishly bright look of the production – a mad carnival world that has an unmistakably eerie edge, with its pinball machine that sporadically comes to life, a burnt-out old dodgem car and tawdry bunting.

“It’s visual madness, it was like having a paintbox and going crazy,” says Clements, who earned Sydney Theatre awards for best costume and stage design in an independent production following the show’s 2017 debut. Her work includes The Father for Sydney Theatre Company and The Rasputin Affair for Ensemble Theatre.

“I spent a lot of time looking at fun houses and the detritus of fun … things that were made for entertainment that ended up useless, discarded or completely irrelevant in the modern age. Because that’s what each character is battling as well. Assassins is about America, failure and failed dreams.”

Sourcing props, furniture and costumes was the fun part. Clements turned to salvage yards, junk stores and vintage-clothing shops. Gumtree proved a goldmine for obscure items, such as a discarded row of old theatre seats, while local theatre companies including the Sydney Theatre Company and the Ensemble Theatre loaned various other items.

The moveable dodgem car was custom built in the Belvoir St Theatre workshop in Marrickville and came about following some disturbing images Clements found of the aftermath of the 1986 Chernobyl nuclear disaster.

“There were all these really haunting photos of old school buildings, fairgrounds, hospitals, people’s homes that had been abandoned, left for dead. There was an old dodgem car that was just sitting in the middle of a field, rusted with grass growing on it. There’s something really devastating about a carnival item that’s been left to rot.”

Clements used mood boards and later a set model to work with Bryant and the nine-strong cast. She admits there were times she wondered if it was all a little too crazy. “I remember showing it to the cast and someone said, ‘This looks cool but how is it all going to work?’ But it’s a really simple concept in that one or two items are illuminated in each scene to help contextualise the period that scene is happening in. So it’s a really simple way for the audience to follow the story.”

Given Sondheim’s uncanny grasp for multiple musical genres – think West Side Story and Into the Woods – it’s no surprise the score also expertly guides the audience through the various eras that produced each assassin – marches, spirituals, folk and rock.

“There are so many childhood games associated with guns – laser tag, arcade games – and that manifests into this complete apathy about what that item is until it’s a daily [or] weekly occurrence where children are being killed in schools. The juxtaposition between that innocence and the unbelievable level of harm being done with that item is fascinating. So I wanted to draw attention to that by making the guns toys.”

Toy guns also allow the audience to relax without the anticipation of gunshots that a “real” loaded stage gun would bring.

“When I see a show that has loaded guns I’m completely on edge,” she says. “For the majority of Assassins they look so much like toys the audience will feel completely comfortable with them. Until we don’t want them to feel comfortable anymore.”

Assassins is playing at the Sydney Opera House from June 7 until July 1.