This Book Sanctuary Has a Stringent Test for Employees

A store with a rare sense of character, history and accidental Instagram fame. 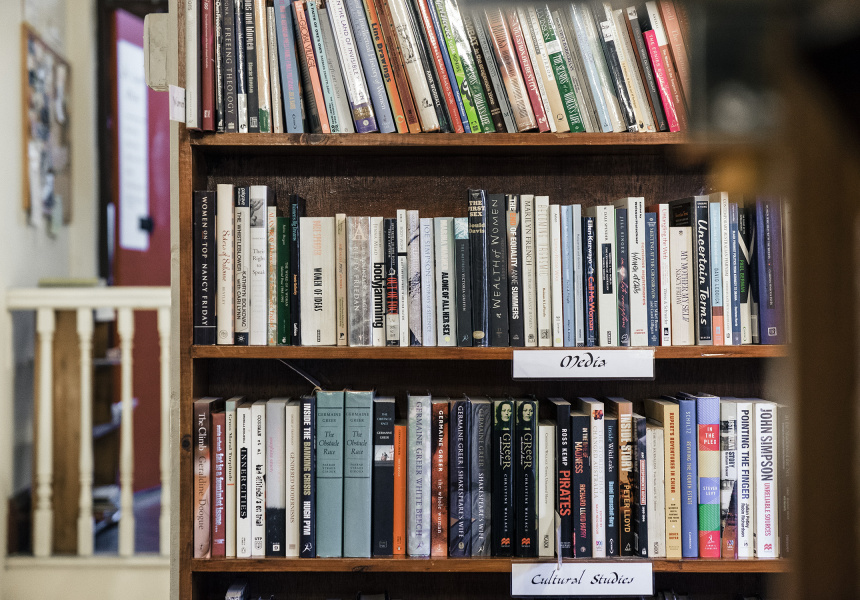 Two years ago Meredith Baillie cleared the rubble and rubbish out of the narrow lane that runs alongside her Glebe bookstore, Sappho. Then she hung purple fairy lights all the way along it.

“We made it really bright so it would seem inviting,” says Baillie. It also allowed people to access the courtyard bar at the back without going through the store. Baillie couldn’t have predicted it but that simple string of lights became an Instagram sensation.

She shakes her head, still surprised at it. Her reaction says a lot about the kind of store Sappho is.

Baillie’s eclectic second-hand bookshop has been a feature of Glebe for 22 years. When first-timer’s walk in they feel like they’ve discovered a special haven. Especially when they find the leafy courtyard cafe and bar.

“We’re very selective with our stock so there isn’t a heap to wade through when you browse,” says Baillie. “It's thoroughly categorised. There’s a real emphasis on physical beauty with carefully chosen music and a warm environment. It’s designed for you to enjoy being in.” Live poetry readings are held once a month. At them three published poets read work and then there’s an open mic. It’s always packed.

During her two decades in the area Baillie's seen rent increases push out many of Glebe’s more idiosyncratic shops. She believes a neighbourhood bookstore like Sappho is important for people’s wellbeing. “The way we live is getting progressively more isolating, which leads to loneliness and depression,” she says. “It’s not the way we’re wired. People need real human contact. You get that in small shops.”

Upstairs is another such business, Da Capo Music, Australia’s only second-hand sheet-music store. “It was once an institution of its own,” says Baillie. Her mother used to run it and when she reached retiring age Baillie managed it prior to starting Sappho.

Baillie no longer works here every day but encourages customers to take the time to chat to any of the staff. To get hired at Sappho you first need to pass a notorious book test by identifying the correct authors. “I’ve actually just introduced a preliminary test before the real one,” says Baillie. “You have to correctly guess 19 or 20 out of 20 authors to even do the real test.”