The Broadway musical from the creators of “South Park” finally hits Australia. And it was worth the wait. 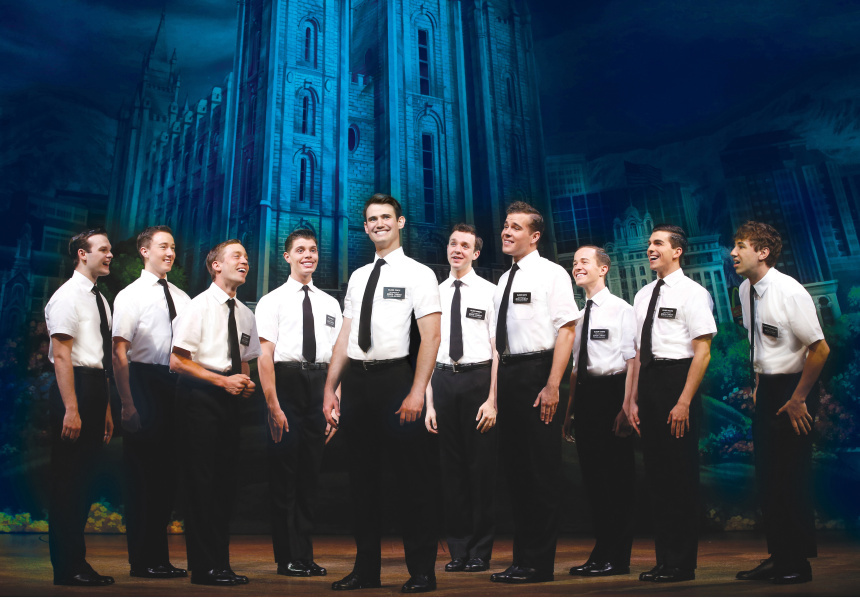 UPDATE (30 August, 2017): The Book of Mormon is coming to Sydney. After a sold-out run in Melbourne, posters teasing the arrival of the Broadway hit have started popping up around town. Stay tuned for more details.

Did Jesus Christ really make a trip to America shortly after his resurrection? Was the Garden of Eden really in Missouri? Does God really come from a planet called Kolob? Probably not, but these are just some of the tenets of the Mormon faith. Even the last one, which draws a deservingly big laugh in the hit satirical musical The Book of Mormon, which, after a seven-year run on Broadway and London's West End, gushing critical adoration and too many awards to count, finally opened in Melbourne on the weekend.

Mormon beliefs, if you’re not up to speed, are rooted in a third testament of the Bible that prophet Joseph Smith discovered, literally, buried in his back yard. It tells of Jesus’s post-resurrection adventures in America. It’s ripe for satire. But if you’re looking for an atheist’s night out, hoping to have a good chuckle at the futility and absurdity of organised religion, this isn’t your night. Even the Mormons are into it. In New York they've advertised the church on the production’s brochures.

In the musical, two Mormon missionaries travel from Utah to Uganda where they’re faced with disease, famine and war. They’re ill-equipped and soon realise their beliefs are completely irrelevant if they can’t offer tangible help. Meanwhile they’ve brought their own problems: ignorance, evangelism, selfishness, denial and martyr complexes.

No, wait, come back. It’s a comedy. I promise. And a bloody funny one. Not even “funny for a musical” (because, look, I’m sorry, but they’re not usually that funny, are they?).

Our heroes are Elder Price, a narcissist, and Elder Cunningham, a compulsive liar. They don't have a hope in hell of wooing the chief's daughter, Nabulungi (or Nutribullet, or Nutella, or whatever – Cunningham can never quite remember), or of saving the town from murderous warlord General Butt-Fucking-Naked (whose name is more memorable).

The songs are, as you’d expect, impeccable examples of musical theatre: boisterous, camp and melodramatic, with the welcome addition of crass and salty lyrics. (Billy Elliott never sung about female genital mutilation, and the Phantom of the Opera didn't have maggots in his scrotum.) The cast, led by Ryan Bondy, A.J. Holmes (both veteran imports from the US and UK versions of the show) and Australian Zahra Newman, are a finely tuned comic-timing machine.

Criticisms that the Ugandan locals are portrayed as bumbling idiots are unfounded. They're given the most empoweringly vulgar material (such as the Hakuna Matata-esque catchcry "Hasa Diga Eebowai", which translates to "Fuck you, God"), and they're rightfully angry about their lot in life and their powerlessness to do anything about it. Both Americans and Ugandans are (lovingly) roasted throughout, but it’s the Americans who come off worse, with their Lion King-based understanding of African culture and utterly self-absorbed desire to spread their white-bread beliefs. It’s satire gold because it resists the urge to punch down.

A lot of that comes from the play’s pedigree. It’s written by the duo behind South Park, Matt Stone and Trey Parker. Fans of their work will know them for their knack for show tunes in the South Park movie and Team America: World Police. They clearly love the form. Both of those films simultaneously satirise and celebrate the conventions and cliches of musical theatre. Collaborator Robert Lopez is behind Broadway puppet musical hit Avenue Q. Put them all together and you get nine Tony Awards and, in Melbourne a few weeks ago, queues around the block to get tickets for the Princess Theatre’s run of the show.

South Park, which just wrapped its 20th season, is a consistently intelligent satire, revelling in blasphemy and shock but never gratuitously. Religion has always held a fascination for the duo, the weirder the better – and The Church of Jesus Christ of Latter-day Saints holds some truly bizarre beliefs. A 2003 episode repeatedly referred to the Mormon origin story as "Dumb, dumb, dumb, dumb, dumb”. The Book of Mormon, at one point, upgrades that to “stupid shit”. But it might come as a surprise to some just how kind this show is to Mormons. It’s not a savage take-down of religion; it’s about the power of belief.

It’s quite a marvel to tow the line so elegantly between mocking a belief system and accepting the virtue in it, but this is the biggest success of The Book of Mormon. It uses musical theatre to discuss the complexities of human belief. And it’s bloody funny while it’s doing it.