An animal rights group is challenging a controversial artwork at Dark Mofo. Photography: Photo courtesy of the artist
1/4 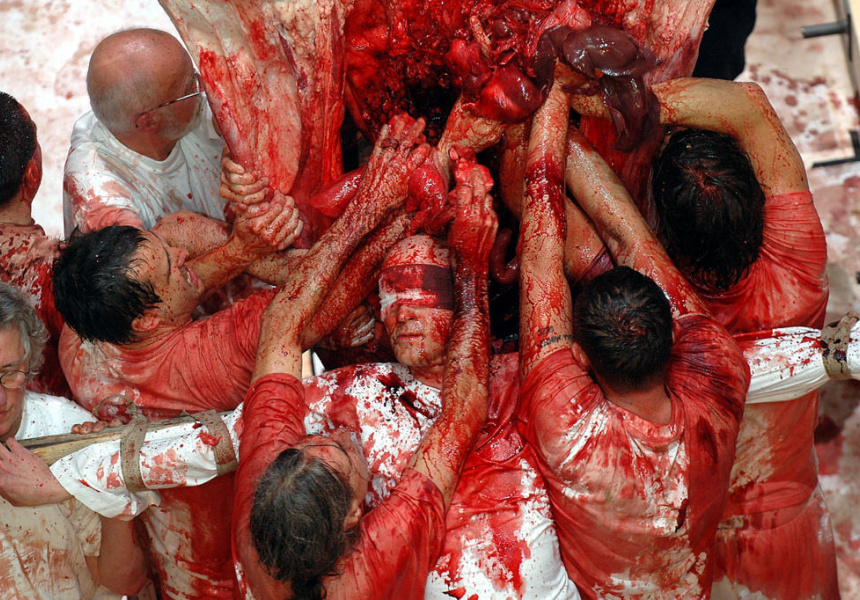 Animal Liberation Tasmania is attempting to shut down a Dark Mofo performance by contentious Austrian artist Hermann Nitsch. Nitsch's work, titled 150.Action, will feature 500 litres of blood and an animal carcass, which the group feels will trivialise the slaughter of animals for human usage.

This morning, Animal Liberation Tasmania (ALT) set up a change.org petition in the hope of gaining enough public support to have the event cancelled.

Animal Liberation Tasmania says the event "condemns a sentient being to death in the pursuit of artistic endeavours".

“Firstly, and most importantly, there will not be a live animal slaughtered as part of any Dark Mofo performance…the animal to be used is specifically on the market for slaughter. The carcass will be sourced locally, and the animal will be killed humanely, adhering to Australian standards”, said Dark Mofo creative director Leigh Carmichael.

“Dark Mofo has been exploring ancient ritual and ceremony since its inception in 2013,” Carmichael said. “Hermann Nitsch is a highly regarded international artist who has been presenting variations of this work for five decades, and we believe the work is as relevant today as it was when it was first performed in Vienna in 1962.

“We understand that his work will be confronting and difficult, but we will not shy away from presenting work that challenges us to consider the ethical implications of our actions both today, and in the past.”, continued Carmichael.

Nitsch’s work Aktion 122 (2005) simulated the crucifixion of a man in front of a flayed bull carcass while a group of naked men repeatedly stabbed him with metres-long wooden spears.

Dark Mofo has insisted that this confronting work is strictly for 18+ audiences.