There’s a short festival with nine acts; a two-play season (including a world premiere); and a madcap pantomime. Belvoir has always enjoyed its reputation for doing things a little differently, and the announcement of part two of its 2021 season indicates that’s not about to change.

“We remain in a time of adventure, and who knows what’s going to happen next,” Belvoir’s artistic director Eamon Flack tells Broadsheet. “We promised we’d do things a bit differently this year, not just because we have to but because change is good: new ideas, new forms, new ways of working are the best way forward.”

“We’ve come out of Covid feeling more ambitious and driven to celebrate the artform itself,” Flack says. “My programming is bolder than it would have been before Covid. We live in a world awash with content, but virtuosic live performance is like magic. You can get content from the internet, but what you can’t get is the ‘how’: the performer right there in front of you with all their skill and talent and desperation and fearlessness. The ‘how’ is the great joy of theatre.”

Part two of Belvoir’s 2021 season kicks off on September 7 with the Festival of Everything: nine different acts – including satire, comedy and cabaret – across 24 performances, held over three weeks. There might be multiple shows in the one night or one show restaged over a few nights – “a real smorgasbord”, says Flack.

“It’s Belvoir throwing a party for audiences and artists to celebrate the fact we’re still going – not ‘we’ as in Belvoir but everyone. The performing arts, in the age of Covid, is still a great, glorious, live thing and we want to bring together as many audiences and artists as we possibly can across the three weeks,” Flack says.

From October 7 Belvoir will present, in repertory, two great plays about power and change, staged one after the other on the same set, with the same ensemble – led by actors Sacha Horler and Rebecca Massey – and the same directorial team of Flack and Hannah Goodwin (assistant director on Belvoir’s My Brilliant Career and Stop Girl).

Set in 1970s Kings Cross, Valentine’s Wayside Bride is the story of Wayside Chapel founder Ted Noffs’ fight to save the space he’d built as a haven for people who didn’t fit into “normal society”. Valentine spent years researching and gathering first-person stories of couples who have been married at the distinctive chapel.

“Moving, inspiring, Valentine’s play is about all of us – and a portrait of this city at its raffish, recalcitrant best,” says Flack.

Churchill’s Light Shining in Buckinghamshire is set almost four centuries earlier, in the wake of England’s bloody civil war, as society begins to rebuild itself after deposing and beheading its king.

“It’s a play about revolution, about change, but also – like Wayside – very much about how you create a place in society for the vulnerable, the outsiders,” says Flack.

The year finishes with a work “of utter joy”, The Boomkak Panto. Premiering on November 20, it’s about a small nowheresville Australian town that, when suddenly confronted by a big multinational developer, decides to fight back by staging a panto.

“It’s a big pudding of stuff, a deliberate celebration to end this year on, and an excuse to put all your favourite theatrical performers into one big work,” Flack says.

The production features songs by Tony Award-nominee Eddie Perfect, as well as Aussie rock classics, dance and “old-fashioned silliness”, and will be co-directed by Calamity Jane’s Gay and Richard Carroll.

Flack says he is indebted to the support shown not only by the state and federal government and generous philanthropists, but also the loyal Belvoir audience, many of whom donated their 2020 tickets back to the theatre and gave what they could in terms of small financial donations.

“People in Sydney have a good read on when to get back out amongst it, and our experience is people are hungry for theatre and live performance,” he says. 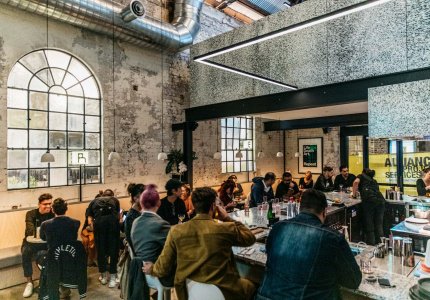