The Beastie Boys of the Balkans

Soviet Suprem brings gypsy beats and a punk spirit to So Frenchy So Chic. 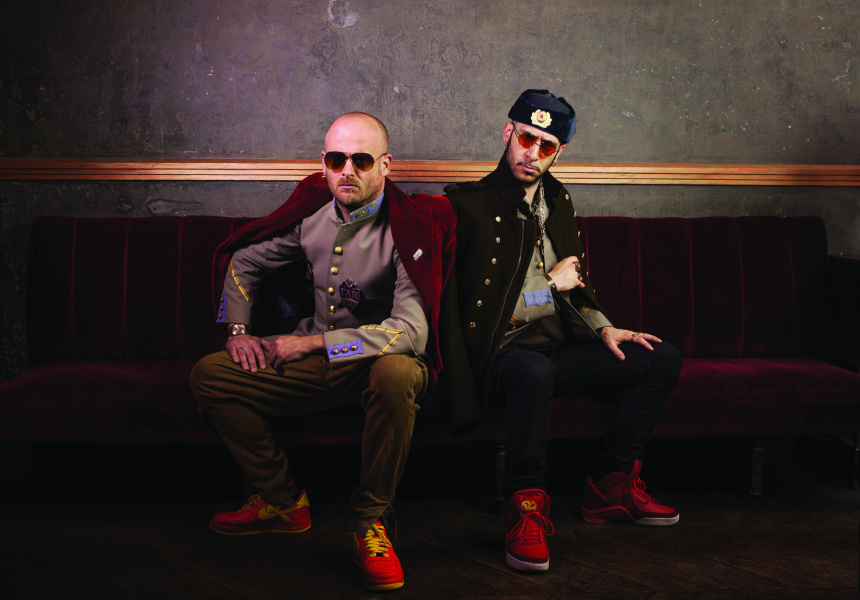 According to French journalists, Soviet Suprem is “the Beastie Boys of the Balkans”. And according to the duo itself, it’s the odd one out on the So Frenchy So Chic line-up. It’s performing alongside Lou Doillon, Brigitte and Hindi Zahra; all of which are “very chic”, says one half of the group, Erwan Seguillon (aka R.Wan). “But we are not very chic – we’re more punk, you know?”

The duo initially teamed up to create music specifically for Balkan Beats parties (club nights now popular worldwide that originated in Berlin, and which blend traditional music from south-east Europe with electronica): music made for dancing, that pooled their interests. But the pair soon made an album – L’Internationale – and the project evolved into a madcap concept.

The members of Soviet Suprem have aliases – two imaginary heroes: Sylvester Stalin, and John Lénine. “Two generals who wake up in 2015, 25 years after the Cold War and decide to make the revolution happen,” Seguillon explains. What ensues is a mixture of light punk, bolshie gypsy beats and hip-hop combined with, as they describe it, “over-the-top iron-curtain theatrics”.

It’s what they imagine “world music” might look like seen through the eyes of Moscow, had the Soviet Union won the Cold War. They’ve even created their own linguistic mash-up because, Seguillon says, French lacks groove. “It’s very precise; it’s difficult to make French lyrics swing. That’s why we invented our own kind of language. The base is French but we also take words from Russian, English and Serbian.” One song title, for example, is Rongrakatikatong.

With this aesthetic comes a whole array of Soviet-inspired paraphernalia: uniforms, medals and a whole brand created out of Soviet symbols, including a riff on the Nike logo with "Nike Air Marx”. (Seguillon enjoys the subversion of this: Communism versus commercialism.) The band’s live shows are high-energy, and incorporate stage décor and theatre. “We have a gulag for the people who are not dancing,” he says. “They go to jail, things like that.”

There’s some method to this madness. Seguillon grew up in a part of France that was under Communist rule before the fall of the Berlin Wall. “So I was a kid during the Cold War and have grandparents who were in the Communist Party. I grew up with this imagery.” Feterman’s family is originally from Serbia, and grew up with traditional Balkan music. It taps into ostalgie, Seguillon says. Not nostalgia exactly, but a German term to describe nostalgia for life under the socialist system (and a widespread cultural phenomenon in former Communist countries).

Soviet Suprem revels in its political shtick. Its film clips run like surreal wartime movies. Soviet Suprem Party, for instance, has world-leader impersonators descend from a “last chance” summit into a vodka-fuelled disco, before the Earth is blown up. Still, it’s all very light-hearted. “I’m not a politician,” says Seguillion. “But if after the concert they [the audience] thinks about political things, it’s good.” Crucially, “the most important thing for a musician is to entertain people.”

And that’s what will happen when they get here. Soviet Suprem began life in clubs, and it translates well to a festival. “We find the same energy as rock’n’roll. And, with Australia’s mix of Greek and Serbian cultures, for example, maybe people will like our Balkan music.”

Soviet Suprem performs at So Frenchy So Chic January 16. Tickets are available here.