All This Mayhem: The Second Coming of Tas Pappas

What happens to skaters with talent, but no brakes? Former world no.1, Australia’s Tas Pappas, knows better than most. 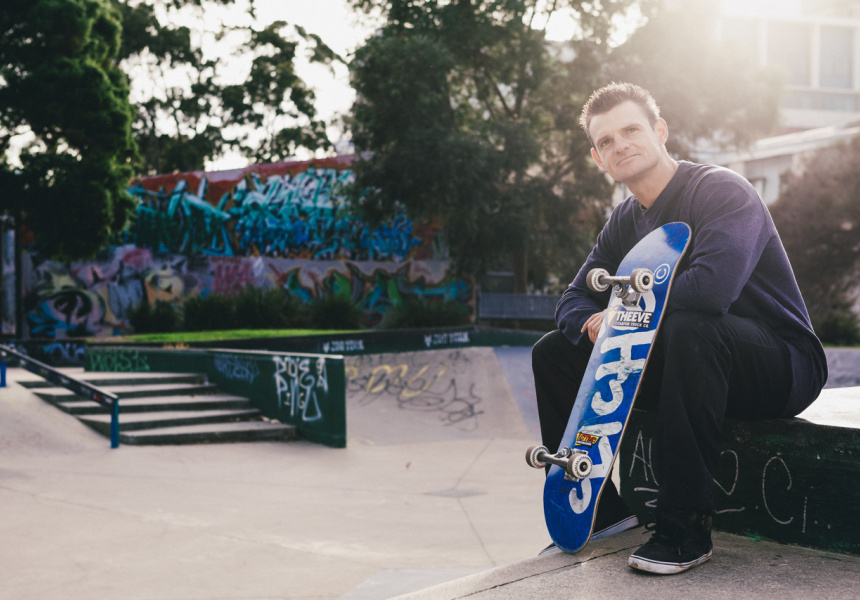 Tas. Weightless at the ramp where it all began. 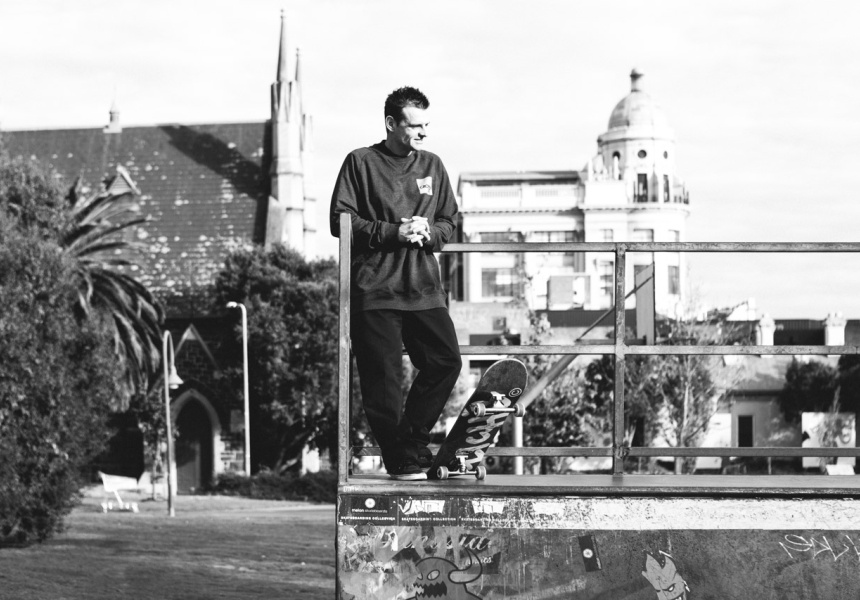 If you were a professional skater in the mid-'90s, you weren't as good as Tas and Ben Pappas. They were the Melbourne phenomenon who helped bring vert-skating (on half-pipes) back from the dead, while somehow integrating the entire street skating trick catalogue - kickflips, shove its and the rest. Their all-or-nothing approach made Tas and Ben the respective world number one and two skaters in 1996, before it all went horribly wrong. In a little over a decade, Ben was dead and Tas was in jail. All This Mayhem is the documentary explaining why.

I'm meeting with Tas (pronounced Tus) at Melbourne's Prahran skate park to discuss the film and to get a lesson in half-pipes. I don't actually skate, but I figure Tas is more likely to talk about his film than pressure me, so I'm not worried. He shows up twenty minutes late and bounds across the park with his publicist. He's short, but built with a staunch, muscular frame that makes you think of racehorses. “So I'm showing you how to drop in?” he grins. “This is gonna be awesome!”

Prahran's half-pipe is a rusting monster, probably six metres up, and enjoying a freezing wind. Tas, now 38, doesn't hesitate. He drops like a brick and roars up the opposite bank, turning silently in mid-air, then rocketing back down. It's weird watching someone do something so fast, so effortlessly, with that in-the-zone expression. Then he's back next to me. “Nah mate, it's too big. Let's start you in the bowl.” Ben and Tas were in their early teens when they were spotted by the Hill brothers, two skaters who later founded the mega shoe-brand Globe. Once sponsored, the Pappas brothers were taken on a national tour, which gave them a taste of pro-skater life. Soon after, Tas, two-and-a-half years older than Ben, left school and headed for the States, where he became a sensation. When Ben joined him a few years later, the two were unstoppable. By their early twenties they were earning around $15,000 a month. The film chronicles this phase with slabs of home video and competition telecast that makes the brothers look so young, and so happy.

“It all starts with the drop-in,” says Tas. I'm standing on the edge of the half-metre bowl, skateboard poised, with Tas behind me. “My first time, I was twelve and so nervous. But I had to do it because Ben was watching. But that's how it always was. The pressure helped.”

Rolling away, I ask Tas how it feels to be at Prahran, the skate park of his youth. “Well, it's hard,” he says. “This is the last place Ben skated before he died, so I'm trying not to think about it.” Not surprisingly, it's also the hardest part of the film. After their world conquering apex in 1996, the Pappas boys spent more time partying, and less time skating. This culminated in Ben getting stung at Melbourne airport with 103 grams of cocaine. After his conviction, Ben couldn't get a US visa, effectively ending his career and instigating eight years of depression, heroin and finally, a murder-suicide. A few days after his ex-girlfriend's body was discovered in a Melbourne creek in 2007, Ben, the prime suspect in her murder, took his own life. He was 29. “That's why I was so keen to get this story told,” says Tas. “It's a cautionary tale, you know. Plus, I wanted people to see Ben's side. He was everything to me, and never supposed to be that person.” In 2008, after a series of grieving, reactionary bad choices, Tas wound up in jail, also for cocaine importation. In prison, Tas, finally found some escape. “It's actually the best thing that could have happened,” he says. “It gave me time to process Ben's death, just away from everything.” Tas got off drugs, turned to Jesus and began work on what would later become All This Mayhem.

“This film producer,” explains Tas, “Who I won't name, convinced me to sign away the story. Then he made this comment about how the film was Chopper, for skaters, which I didn't like, but it was too late. So I prayed the film would fall through and somehow, thank God, Eddie Martin (director of the cult favourite JISOE) threw this guy off and bought the rights.” What he also did was recruit the production team behind Senna and Exit Through the Gift Shop, who ensured the film would be bankrolled, as well as not become Chopper, for skaters. “Yeah, I got lucky,” says Tas. “I used to laugh at the Jesus stuff, but you can't argue with results.”

Practice is over and I'm standing on the top of the half-pipe. Not the big one, but the medium one, which is still enormous. “You can't wait,” instructs Tas. “Just look at the curve and lean forward.” I see Tas down the distant bottom, and Tas' assistant watching from a distant side, and I lean forward. Dropping in, as it turns out, is a lot like falling off a boat at night. It's all in slow motion and there's a lot of falling, but you land on steel and not water. And then there's a teeth jarring crash and you can't breath. I hear Tas cheering somewhere near and he pulls me up and we hug. “Bro, that was awesome!” He exclaims. Suddenly, I understand skating. It's life, but with the volume turned way up.

All This Mayhem is in Cinemas from July 10 – exclusive to Dendy Newtown Sydney and Cinema Nova Melbourne.