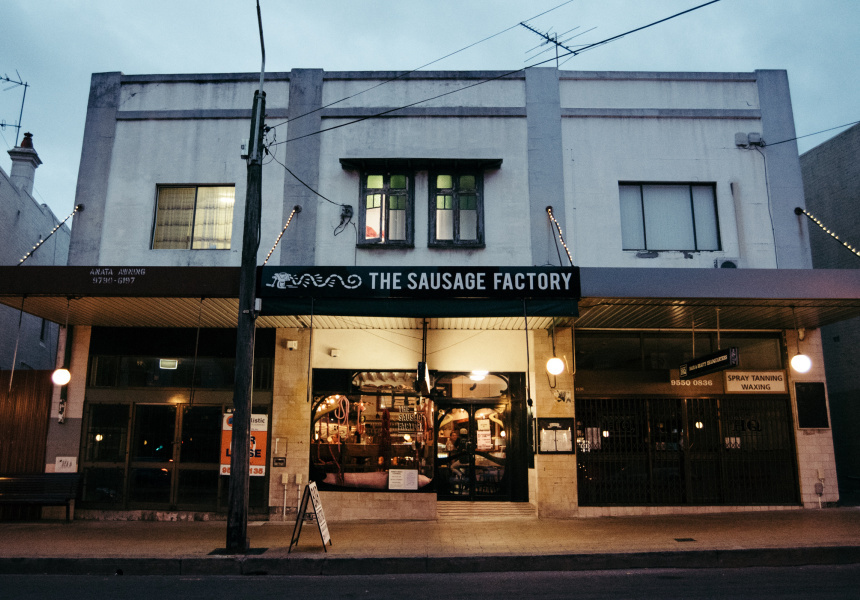 Chrissy and Jim Flanagan are partners but not married (they coincidentally have the same surname). The duo runs The Sausage Factory, a bar, eatery and home to Chrissy’s Cuts, an outstanding brand of free-range, gourmet sausages.

In 2018 the site also became home to Sausage Queen Brewing. Three taps pour a range of beers produced in a small closet at the back of the factory.

Like the sausages, the beers incorporate Australian Indigenous ingredients. The brews fall into three categories: “easy but awesome, “a bit more going on”, and “a bit nuts”. Boss Ale is the most approachable brew and best suited to pale-ale drinkers. The Maligator, a Belgian-Australian hybrid, is the next level up. It’s a lemon myrtle saison (a highly carbonated, fruity, spicy pale ale) – a big, yeasty beer. The third tap pours Virago (a word used to describe a problematic, strong-willed woman. Chrissy wanted to hijack and reclaim the derogatory term), a desert-lime and red-gum smoked-salt gose (“gozah”), a German-style beer with a slightly salty finish.

The two know beer lists can be pretentious and that craft brewers can be uncompromising and lose the regular beer drinker. They want this place to be comfortable for everyone. Between the hearty sausages, tasty beers and regular sightings of Chrissy knitting sausage decorations for the venue at the big table in the window, “comfortable” is the perfect word.