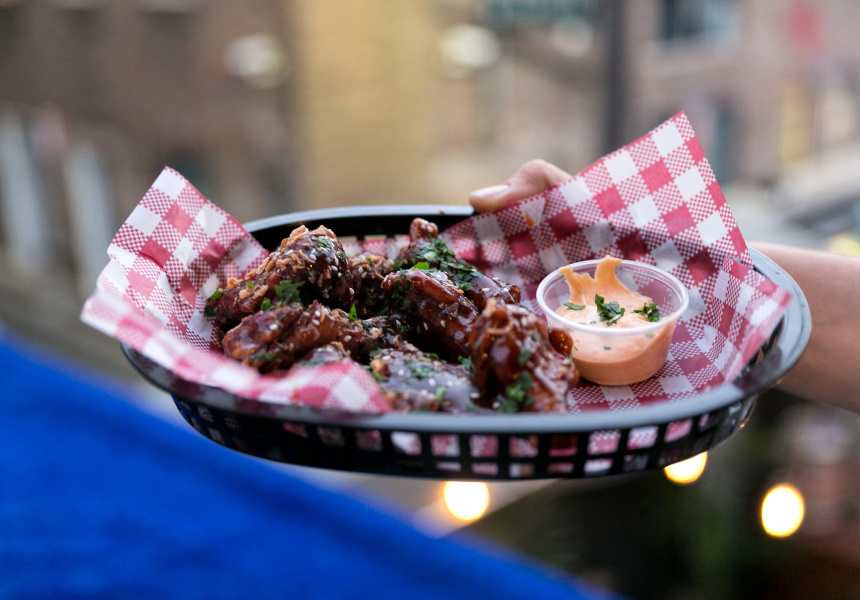 If “T-Bone’s Doom Juice” sounds unsafe for human consumption, that’s because it almost is. The chicken wing sauce is crafted from one of the world’s hottest chillies, the Carolina Reaper, but tastes more like something extracted from between the fifth and sixth level of hell. The guys at Wings and Tins make it in-house and are seriously considering a legal waiver for anyone game enough to give it a go.

That's Anthony Macfarlane and Alfredo Perez, who met in Mexico. Perez owns one of Mexico’s most successful wing joints, Wing Man. They became best mates while surfing and eating wings and beers across the country. Then they realised there was no one in Sydney really nailing their preferred cut of chicken.

For the more cautious folk, there's a slew of buffalo-wing dishes and tinned beer. There's a balance between classic American wings and a few more adventurous options. The Frank’s Original (served with aioli, carrot, and celery) and Alfie’s Hot Sauce (made with achiote chilli and served with a blue-cheese sauce) pay homage to the tradition of making chicken sticky and hot. But diners can also expect to find flavours such as the baked tandoori with coriander and tzatkiki, or blackberry and brown sugar served with fried shallots and blue cheese.

As the name suggests, tinned beer stars here with an ever-evolving list including classics like VB, through to craft brews such as Colonial Brewery’s Small Ale.

The fitout is decidedly kitsch. Private booths are themed and draw inspiration from ’80s ski chalets and what looks like a bedroom from Kath & Kim. Fairy lights bring some luminescence to the dark space, which looks and feels like a Mexican dive bar.