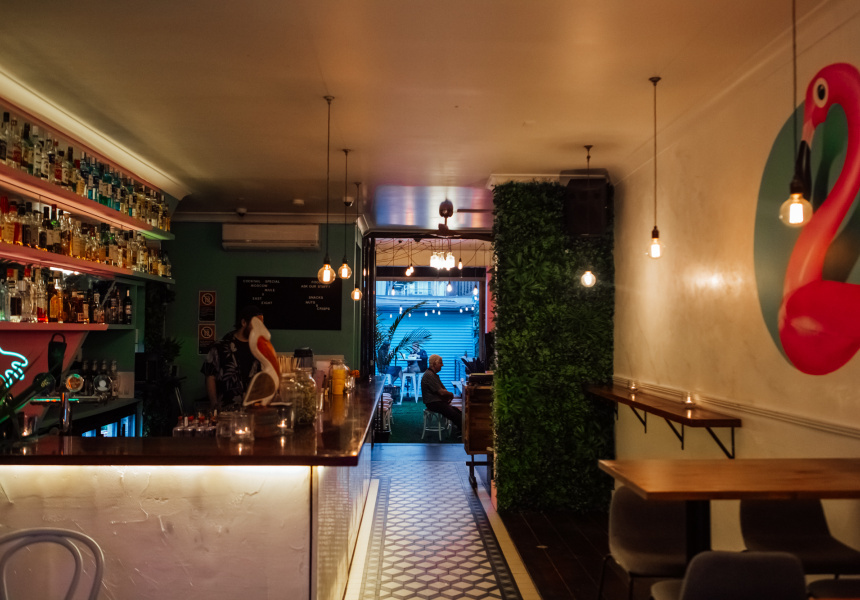 When Stanley’s Bar in Darlinghurst first opened in May 2018, it looked to the whimsical visual style of Wes Anderson films (The Royal Tenenbaums, Moonrise Kingdom, The Grand Budapest Hotel) for inspiration. Now it has new owners and a new reference point: the ’80s crime-drama TV series Miami Vice.

While the Anderson-esque powder-pink exterior remains, the zebra-print wallpaper that once covered the interior has been replaced with pops of flamingo-pink and teal paint. The space has also been rearranged to include additional seating along the wall opposite the bar.

There’s a greater focus on music than before. Thursday evenings are BYO-record night, which gives budding DJs the chance to spin tracks from their collections. On Friday and Saturday nights acts take turns in the booth, pumping mainly disco-house.

To match the venue’s tropical party vibe, the cocktail list uses seasonal ingredients. Signatures include the Flamingo Rum (watermelon, vodka, pomegranate and basil), which is named after the pink paint on the walls, and the Everything’s Peachy, with gin, Aperol and peach liqueur, topped with prosecco.

On the food front, there’s a selection of bar snacks including smoked almonds, wasabi peas and curried peanuts. It’s also serving three toasties: a classic cheese; a Reuben; and a truffle toastie layered with vegemite, truffle and camembert.