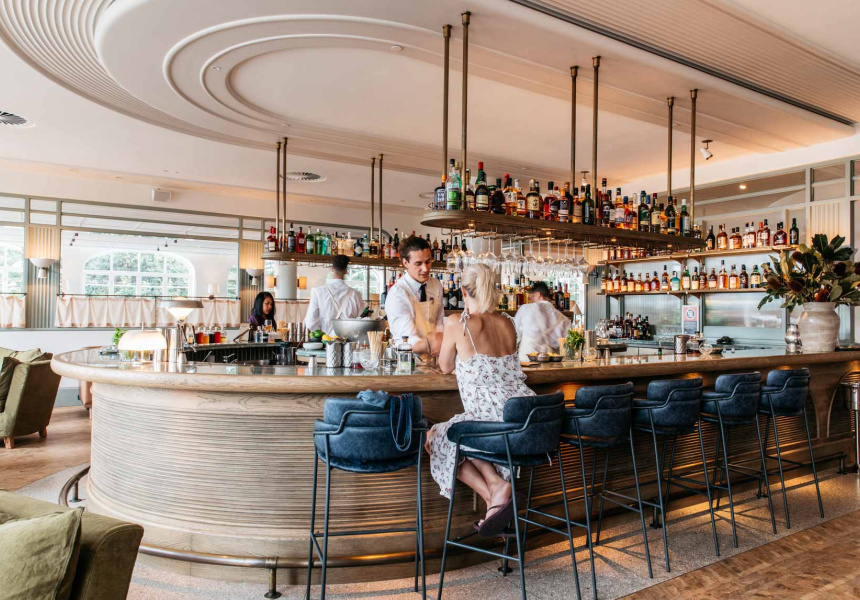 There are three distinct dining and drinking areas open on the middle floor of the Coogee Pavilion, which sits at the south end of the beach. The smallest space is Will’s, a Euro-inspired cocktail bar next to fine diner Mimi’s and wine-and-tapas bar Una Más.

Will’s shares the same design ethos and colour palette of its two middle-level buddies. There’s tan-coloured leather seating, linen lounges, parquetry flooring, a chic horseshoe-shaped bar and great use of lighting to show off the ceiling’s curves. It’s a smart, easy-on-eye space that has an effortless elegance – ideal for both daytime and night-time imbibing.

The cocktail list transition easily from day to night. Like The Southerly – named after the cool change that transforms Sydney from a hot mess into a breezy afternoon – made with foraged rose geranium, aloe vera, coconut water, gin and Lillet. Other drinks focus on fruit: we suggest the easy-drinking High Tide. The list changes throughout the year, to incorporate what’s fresh and in season.

Martinis are a big deal here, too. But instead of using vermouth and olive brine to make it dry, wet or dirty, they use local coastal ingredients.

Many of the snacks you can order here are served at Mimi’s and Una Más, such as the very fine blacklip abalone. It’s skewered on a bay-leaf stalk with salty pancetta, then barbequed to give it a hint of smoke. There’s also roasted chicken-skin cooked crisp and then smeared with anchovy bread sauce; and cannoli served with chicken-liver pate and cherry.

It’s worth arriving early to try to score a seat at the window, where you can watch waves roll in and people laze on the beach across the road.