“There's no way I want my artwork to be associated with a gaming venue or any licensed establishment.” 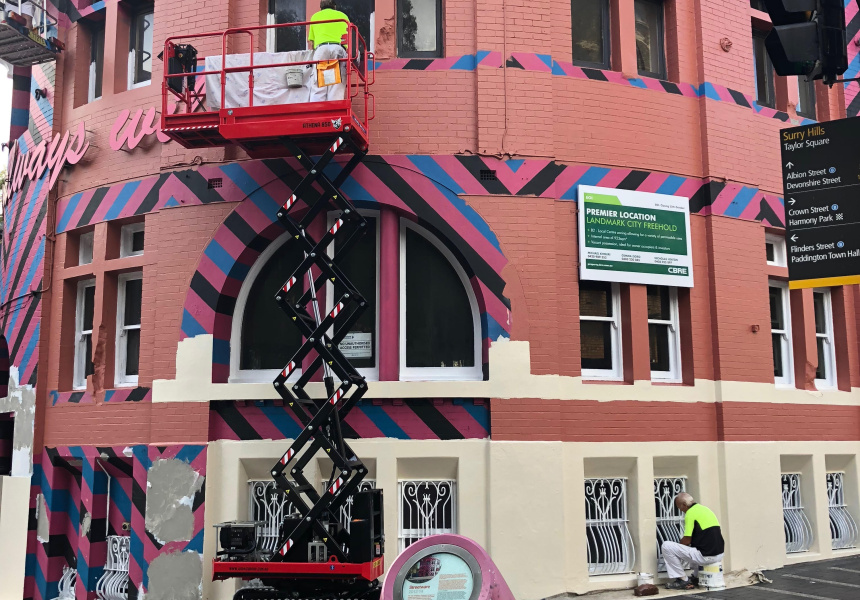 Work on removing the Always Was, Always Will Be mural by Reko Rennie on Taylor Square’s T2 Building has begun.

The mural, which features bold, vibrant fluorescent pink, black and blue geometric diamonds – which reference the artist’s associations with north-western NSW and the traditional markings of the Kamilaroi people – is slowly disappearing. It is being replaced instead by salmon-pink paint and white trimmings.

The mural’s removal from the facade follows the City of Sydney’s decision in early November to sell the building. That decision, according to the ABC, then prompted Rennie – one of Australia’s most prominent artists – to erase the artwork. "There's no way I want my artwork to be associated with a gaming venue or any licensed establishment. So unfortunately the City of Sydney gave me no other choice but to have the work removed because it couldn't guarantee the future of it.”

The piece was originally commissioned for six months as part of the City of Sydney’s 2012 Streetware project, but the council decided unanimously to retain the artwork for two more years. It was later extended to September 2017. In 2012, Lord Mayor Clover Moore said: "Always Was, Always Will Be, Reko Rennie's stunning art installation on the former T2 building, has transformed its drab walls with colour and vitality and given new life to the Taylor Square precinct.”

In a statement last week the council said: “Although this artwork holds significance to Sydney's Indigenous community, it was not commissioned as part of the Eora Journey program that celebrates living culture of the Aboriginal and Torres Strait Island communities. It was always intended to be a temporary piece."

The council appointed CBRE to sell T2; CBRE has marketed the building as an outstanding opportunity to be part of Oxford Street’s resurgence as a popular retail, commercial and residential destination. “The future of this property has the potential to redefine Oxford Street, bringing new life to one of Sydney’s most loved and renowned streets,” says CBRE agent Gemma Isgro.

Labor councillor Linda Scott told the Sydney Morning Herald she was "deeply opposed" to the sale of the building. "Rather than stripping this building of public art and selling it off to the highest bidder, I'm yet again calling on the Lord Mayor [Clover Moore] to keep this building in public hands and use it to lead the revitalisation of Oxford Street," she said. "Taylor Square is an iconic public space in Sydney, and we can't afford to get it wrong."

There has been strong criticism surrounding the city's decision to sell the building, with critics saying the space could be used to create Australia’s first permanent LGBTI Museum and cultural space, honouring, celebrating and preserving the LGBTI history of Sydney and Australia. A petition was created to stop the sale. "If this sale goes ahead, we’ll just end up with another convenience store, empty shopfront or apartment block on Oxford St – and our history still won’t have a permanent home."

Applications for T2’s expression of interest is now closed and CBRE is considering submissions.