Smoke and Explosions at Circular Quay

Motorists and public-transport passengers are advised to avoid the area. Clouds of smoke are blowing through Sydney’s CBD following a large fire at Circular Quay. Twelve fire crews were called in to fight the blaze at the site of the old Goldfields House Building. Small explosions were heard at the site on Pitt Street and Alfred Street. Sheeting and scaffolding on and around the building were alight.

Trains are not stopping at Circular Quay station and motorists are being advised to avoid the area. The Cahill Expressway was closed in both directions. At the time of publishing there was no access to Bridge Street from Loftus Street and George Street is also closed between Bridge Street and Alfred Street. Check for updates here.

The building, bought by Chinese developers Wanda Group in 2014, was to be demolished to make way for a $2 billion development called One Circular Quay, which is to include a 59-storey apartment block. As reported by the Sydney Morning Herald, the company sold the building in January in a major sale of its Australian assets. The development is scheduled for completion in late 2021.

One of Broadsheet's journalists, Callum Tyler, was driving across the Cahill Expressway and took footage of the explosion. 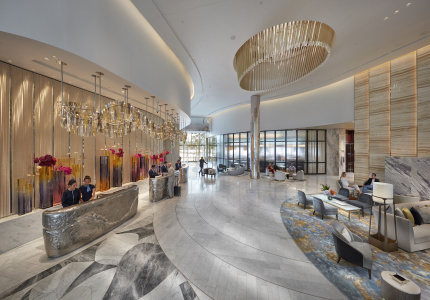