It’s free for customers, and up to 160 cafes can sign up now. The aim? To help reduce the billion takeaway cups Australians throw out each year. If you’re anything like the rest of us, you bought your first reusable coffee cup a few years ago … and then a few more since, when you kept leaving them at home or on your desk during a morning coffee run. There’s a good chance you’ve resorted to using a takeaway cup at some point, or succumbed to drinking-in when you didn’t really have the time.

But now, if you live in Western Sydney, reusable-cup angst could be a thing of the past.

The Western Sydney Regional Organisation of Councils (WSROC) has partnered with free swap-and-go coffee cup scheme Green Caffeen to help cut back on the 50,000 disposable coffee cups that go into landfill every 30 minutes in Australia. (That’s one billion a year.) The WSROC comprises seven Western Sydney councils: Hills Shire, Hawkesbury City, Fairfield City, Liverpool City, City of Parramatta, Penrith City and Blacktown City. The partnership is part of an initiative to encourage residents in the area to seek out alternatives to everyday throwaway items.

With space for 160 cafes to sign up, the councils and Green Caffeen are hoping to reduce the 500 cups (weighing about 7.5 kilograms) thrown out by the average takeaway coffee consumer each year.

To reap the benefits, customers just need to download the Green Caffeen app, then get their coffee made in a reusable cup from any participating cafe. Cups must be returned within 30 days to any cafe that’s signed up to the scheme. (If not, there’s a $12.99 charge – congratulations, you just acquired another cup). Customers can have a maximum of two cups in their possession at any time – helpful for when you forget yours at home, which, let’s face it, you will.

“I used to have reusable cups floating around everywhere – in my car, my wife’s car, my gym bag, the dish drainer,” Damien Clark, co-founder of Green Caffeen, told Broadsheet last year. “We decided on a swap-and-go idea, based on swap-and-go gas bottles, because we’re blokes and that’s how we think.”

Currently more than 11,000 people are signed up to Green Caffeen, which is used in around 420 cafes in Australia, making it the biggest swap-and-go system in the country. A trial held by the company at Good Fella Coffee in Bella Vista and The Tuckshop in Glenhaven saved more than 5000 takeaway cups in three months.

A precedent for the scheme has already been set in Sydney’s west: the Inner West Council – which includes Balmain, Ashfield, Dulwich Hill, Marrickville and Newtown – partnered with Green Caffeen in July 2019. You can now use the system at inner-west cafes such as Ona, Cherry Moon, General Store and Double Roasters.

The Western Sydney initiative will launch on February 24. Cafes can sign up now here, and customers can sign up here. Download the Green Caffeen app on Apple or Android. 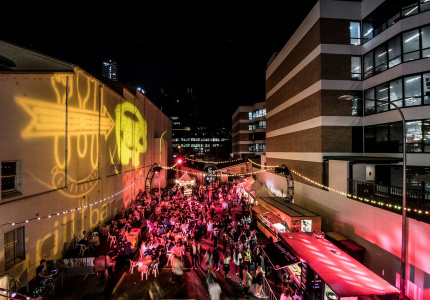