The state-of-the-art facility has gardens, exhibition spaces, an 85,000-volume book collection and a cafe by Double Roasters. 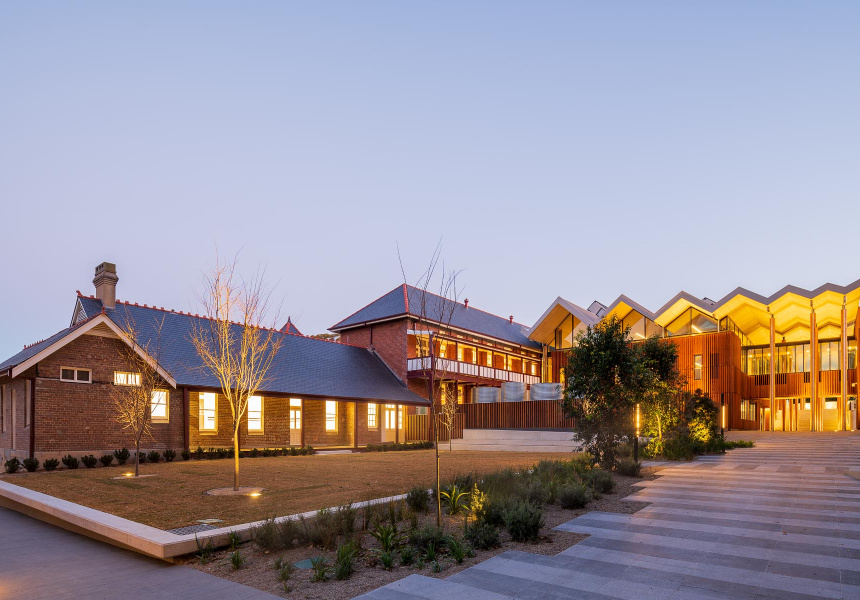 Inner-west residents asked and the council responded. “We had a lot of people requesting for the art stack to be reopened,” says Caroline McLeod, the group manager for library and history services at Sydney’s Inner West Council.

The 4000-volume art-history collection, which includes many out-of-print titles and has a strong historic Australian element, had been in storage in the basement of Marrickville’s Town Hall for 13 years but now occupies prime position in a dedicated loft at the newly unveiled state-of-the-art Marrickville Library. The space has views over the St Brigid’s Church bell tower and is a valuable research asset. “It makes sense that it’s all out in the open, so people can come and explore it,” says McLeod.

In fact, the new library has the capacity to hold 20,000 more books than the old library (on the corner of Marrickville and Petersham Roads), bringing the total collection to an impressive 85,000 books. The striking new facility occupies the site of the old Marrickville Hospital, which was built in 1899 and has sat dormant since closing in 1990. Some of the original features of the heritage-listed buildings have been restored and repurposed, such as the former hospital bathrooms, which have been turned into meeting rooms (open to the public). The tall windows – which were spaced one hospital bed’s width apart for ventilation – now provide ample natural light in the reading room.

In contrast, the library foyer and much of the collection itself occupies a more modern space. The design is by award-winning architectural firm BVN, which incorporated a series of louvers and vents to keep the building comfortable and use as little energy for heating and cooling as possible. Building materials were also chosen with sustainability in mind – the timber supports were salvaged from two bridges in Taree on NSW’s north coast, and over 27,000 bricks were recycled.

“Better design comes from constraints, and the constraints of the historical hospital building meant there was an opportunity for different scales of space,” says Brian Clohessy, the project’s director at BVN. “We’re in this voluminous, high-ceilinged space, with light and a more dynamic environment,” he says of the modern structure. “But when you step into the old building, it feels a bit quieter, like a more considered space.”

There’s also more than 1200 square metres of garden space, a new junior library, a space dedicated to languages, private study rooms and a cafe run by Marrickville’s Double Roasters. An exhibition space has also been opened near the foyer, and there are new computers installed with the much-requested Adobe Creative Cloud suite. In addition to meeting spaces throughout the building, these facilities are intended to create a “neutral ground” for people to meet. “Local artists would previously meet up in someone’s gallery or studio, so this is a nice place that belongs to everybody,” says McLeod.

Another nod to history is the renaming of the grounds to Patyegarang Place. As the first Aboriginal person to teach the local Dharug language to a settler, Patyegarang’s story is associated with learning and culture, and was found to be fitting for a library. In more recent years, the site has also been home to the Indigenous organisations Koori Radio and the Marrickville Aboriginal Advisory Committee.

Adjoining the library is the Marrickville Pavilion, a multipurpose events space. Opening up to a garden, it includes a commercial kitchen, projectors and removable seating for up to 150 people.

To fund the construction of the $40 million library, the council granted Mirvac development rights to build a residential complex, Marrick & Co, at the rear of the site. Over 200 apartments – nine of which are set aside as affordable housing – surround a new green space at the centre of the site, with walkways linking Marrickville Road to side streets.