The Premier Versus The People

Right now, Mike Baird is weathering the anger of thousands of Sydneysiders fed up with the lock-out laws and the damage they're doing to the city's culture. Will he listen? 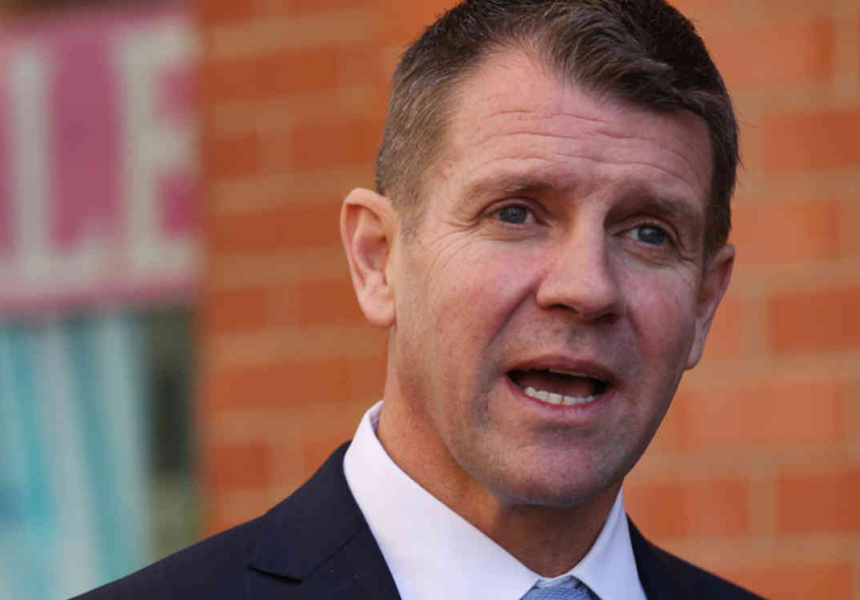 Yesterday afternoon, NSW Premier Mike Baird took to Facebook, as he often does, to send a message to the people. The lockout laws are working, he said. Crime is down, new bars are opening and those of you who think otherwise are hysterical.

Before we continue, it’s worth a quick look at the key moments which led Baird to make his statement. In the past seven days, three separate events have had a huge impact on public perception of the lockout laws. The first was a City of Sydney report detailing how the laws have affected foot traffic across the city. It clearly shows that foot traffic – that is, people actually out and about – has nosedived 80 per cent in Kings Cross and Oxford Street since 2012, and is down in every area of the city, with the exception of the southern part of the CBD and Newtown (Redfern and Surry Hills are described as “relatively stable”).

Following the report, Sydney businessman Matt Barrie published an essay called “Would the last person in Sydney please turn the lights out?”. Chances are you’ve read Barrie’s piece, but if not, his wide-ranging, emotional treatise describes “the complete and utter destruction of Sydney’s nightlife” at the hand of the government and its lockout laws. The piece has been read by more than 1 million people, and the majority of comments overwhelmingly support Barrie’s argument that the laws are destroying the city’s nightlife, culture, reputation and related business.

On Sunday morning, Broadsheet broke a story that a well-loved inner-city restaurant had been visited by police officers, who at 11pm on Saturday night questioned management over the way the venue promotes its sale of wine.

Broadsheet’s story was picked up by media across the country, prompting police to defend their actions on Monday.

Into this environment, Baird chose to come down firmly on the side of the laws.

At time of writing, more than 10,000 comments have been left on Baird’s post (not counting some thousands alleged to have been deleted by the premier’s staff). The reaction, it’s fair to say, is negative.

Government staff has clearly been overwhelmed by the response. Equipped with just one quote from Baird, the tactic seems to be to copy/paste the same comment again and again, trying to head off the most obvious criticisms while ignoring most others. The following exchange is indicative of how this tactic is panning out. 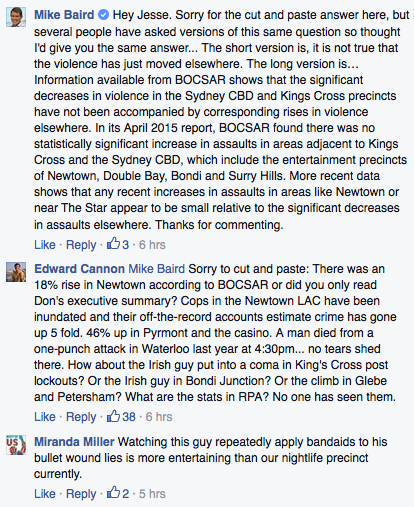 The BOSCAR report Baird and other commenters refer to is a Bureau of Crime Statistics and Research investigation released last year called “Lockouts and last drinks: The impact of the January 2014 liquor licence reforms on assaults in NSW, Australia” which you can read here. This morning, the Bureau's director, Don Weatherburn, told ABC702 and said Baird's stats were out by 20 per cent.

The timing of all this is significant. This month marks two years since the lockout laws were introduced, and the government has recently announced an independent review of the laws. Baird has made his position clear, but the past week feels like a tipping point in the debate.

By saying, on Facebook, "The main complaints seem to be that you can't drink ‘till dawn any more and you can't impulse-buy a bottle of white after 10pm," it appears Baird has mis-read both the mood of the people, and the most problematic aspects of the laws.

Not one single person is disputing the urgent need to reduce alcohol-related violence, or the seriousness with which it should be dealt.

If you have an opinion about how these laws are affecting our city, and their efficacy in dealing with the issues they were purported to have been put in place to solve, now is the time to make your opinion heard by government.

As the premier said on Facebook yesterday, “It is going to take a lot for me to change my mind on a policy that is so clearly improving this city.” Judging by the 10,000 comments and counting, Sydneysiders are well on the way to showing him what “a lot” looks like.