An internationally renowned architect has been enlisted to design a new mixed-use complex, which would also include a public plaza with outdoor dining and 91 apartments. Cavernous ivory archways dripping with greenery could replace the current village Woolworths on Rangers Road in Neutral Bay, as well as an office block on adjacent Yeo Street, if a recently lodged proposal for a sophisticated mixed-use complex is approved by North Sydney Council.

Internationally recognised architect Koichi Takada, who has said his career aim is to “naturalise architecture in the urban environment”, has been enlisted by Woolworths’ development arm Fabcot to devise plans for the $147 million development, which would include a public plaza and thoroughfare, an underground supermarket, 91 apartments and more than 100,000 square metres of commercial space over seven to 10 levels.

The proposed development’s “organic architecture” (a concept first introduced by architecture titan Frank Lloyd Wright more than 100 years ago), offers a soft, though striking, potential addition to the streetscape. By hiding the supermarket below ground, the developers say the public plaza above will create a “town centre” for the south side of Neutral Bay, with outdoor dining as well as loads of public space and seating for locals to use.

Three hundred and fifty carparks would sit below the Woolworths, which will be a “best-in-class” example of the chain according to the application. It would offer a range of delivery and collection options, and encourage customers to use reduced packing and get in on recycling and waste initiatives, like in-store composting. The site would also include EV charging stations and, where possible, be built with recycled or sustainable materials.

The application estimates that the revitalisation would create 113 ongoing jobs while adding 119 residents to the area, mostly in two- or three-bedroom apartments. Woolworths says the upgrade will add $12.7 million to the economy annually. 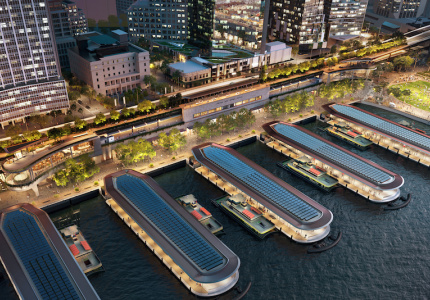