A Huge Rainbow Flag to be Flown Over Sydney This Weekend

After plans to write “SAY YAAASS” in Sydney’s sky were botched, the campaign has a new idea. 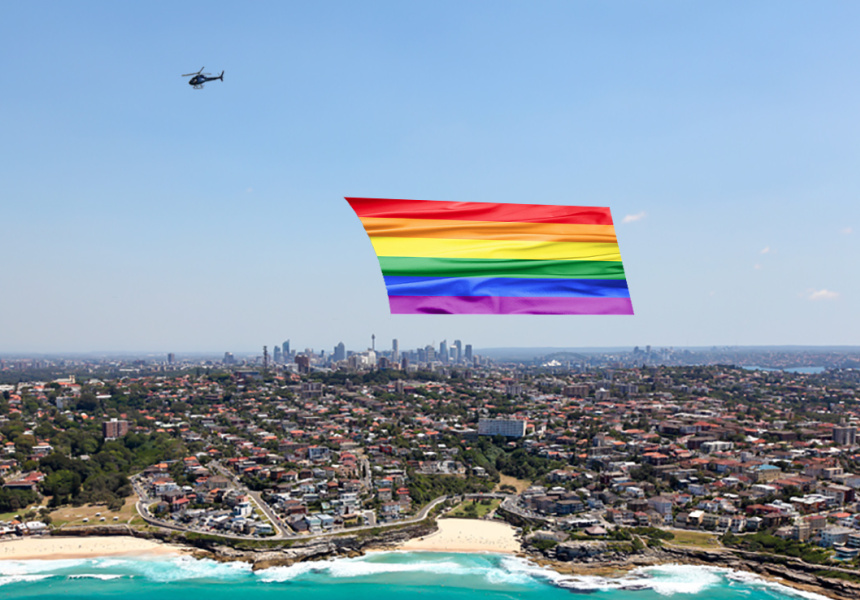 On September 17, Sydney woke to the message of “Vote No” in the sky. On the same day, Sydney actor Joshua Anderson spearheaded a GoFundMe campaign to pay a skywriter to scrawl “VOTE YAAASS” in response.

After reaching its fundraising goal ahead of target, the campaign had a major setback. The east coast’s only available skywriter refused to participate (being a member of the “Vote No” community).

Turns out, Anderson wasn’t the only one to come up with the idea – five others launched similar campaigns to see positive counter messages. The six campaigners (including a tea specialist and sign writer) found each other on social media and joined forces to hatch a new plan – commissioning a helicopter to fly 10-square-metre rainbow flag over Bondi Beach this Sunday instead.

“You’ve got to get creative and figure out ‘how do we make the maximum amount of impact, in the same kind of space as skywriting?’” says Anderson. “Skywriting only lasts 15 to 20 minutes, it blows away. Whereas an enormous flag flying around the city reaches more people. It’s a stronger image and it’s there to remind everyone that there is solidarity behind the campaign.”

At last count, more than $20,000 has been raised across all five active campaigns, with any additional funds going towards extending the flight time and supporting LGBTIQ charities.

“Were looking at charities to make sure that money goes to the right place, that there is support. The whole process has been wonderful, [we’re] now looking to try and help in any way we can.”

The helicopter flight will be going ahead this Sunday October 1 over Bondi Beach at roughly 1pm.