Green Square Has A New Library, And It’s Underground

“You feel that you’re ‘wrapped’ by books.” 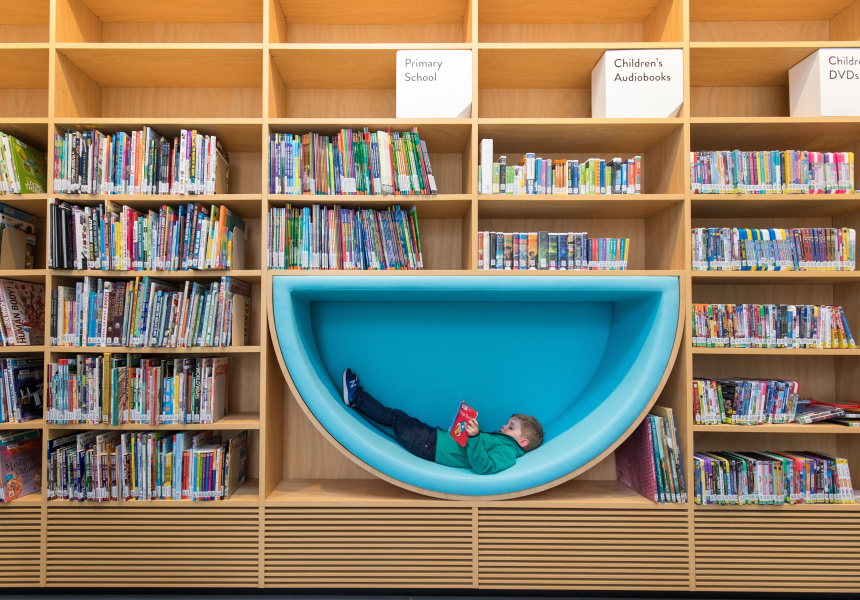 Sydney loves a hidden bar, a secret menu, a discreet pop-up event. Maybe the city will also add “hidden library” to that list with the arrival of the underground Green Square library.

The library’s subterranean design, which is by architecture studio Stewart Hollenstein in partnership with Stewart Architecture, is no mere novelty.

Green Square – a district in Sydney’s inner-south comprising Beaconsfield and Zetland, and parts of Alexandria, Waterloo and Roseberry – is on track to being the city’s most densely populated suburb and, with 90 per cent of residents living in apartments, public space is a prized commodity.

“We looked at how we could embed the library in the plaza, while making the building both an architectural and public space,” says architect Felicity Stewart.

The result is a space that plays with function and form, where the library’s modern amenities – a reading room; a computer lab with a 3D printer; a music room with a grand piano and recording equipment; and a conference space – are housed in a six-storey glass tower.

Below street level lies the library proper, where bookshelves line the walls rather than stand in rows in the middle of the room. Stewart refers to it as the “living room” of the building; where “the books create the frame, and [you feel] that you’re ‘wrapped’ by books.”

Despite its underground location, this part of the library receives plenty of natural light from the floor-to-ceiling windows that look out to the subterranean garden. The garden’s circular shape is part of the architects’ vision to embed geometric forms into the library’s design.

“The idea is that it’s very memorable in its form and shape. We were thinking of legibility and the way buildings are ‘read’ and remembered,” Stewart told Broadsheet, adding that the glass triangle entrance, circular garden and in-house amphitheatre, and the tower that “periscopes” out of the ground contribute to this sense of architectural geometry.

The library also hosts two new public artworks. Cloud Nation is a repurposed vintage aircraft suspended from the library’s ceiling (the plane’s wings feature a Lilliputian island, and visitors are given monoculars to inspect the small-scale model more closely). There’s also High Water, near the entrance, a multicoloured LED screen that responds to the sun, wind and weather.

Libraries have come a long way – they’re no longer the hushed repositories for aged carpet and worn volumes of the Encyclopaedia Britannica. Just look at the two-storey one being built in the Darling Exchange building near Haymarket. It’s designed by Japanese architect Kengo Kuma and should be completed in early 2019.

Stewart describes Green Square’s version as more like a “meeting place”. With bilingual story times for kids and an amphitheatre for local productions, she says it operates as a “storytelling device for the community”.

“There are few places as democratic as libraries. They provide places to sit in a beautiful setting, and that’s so precious in the community. We feel like libraries are places where you can make noise and gather,” she says.

City of Sydney lord mayor Clover Moore says the library and plaza – which have been six years in the making – will become the “new civic heart” of the growing Green Square community.

“Australian architectural firm Stewart Hollenstein and Stewart Architecture won an international design competition for their inspired and unconventional plans, which are now a blueprint for how libraries of the future can meet the changing needs of our community,” she told Broadsheet.

Without any marketing or publicity, the library attracted 500 members during the first few weeks of its soft opening. Not that Stewart is surprised. “We knew it would be popular … I think we could do with a lot more libraries in the city area. The population has been waiting for these facilities,” she says.

This article first appeared on Broadsheet on October 25, 2018. Some details may have changed since publication.