You’ll find an installation that changes with the sun in an alley between Pitt and George streets, a micro-forest flourishing in Haymarket and giant badges dotted along Barrack Street. 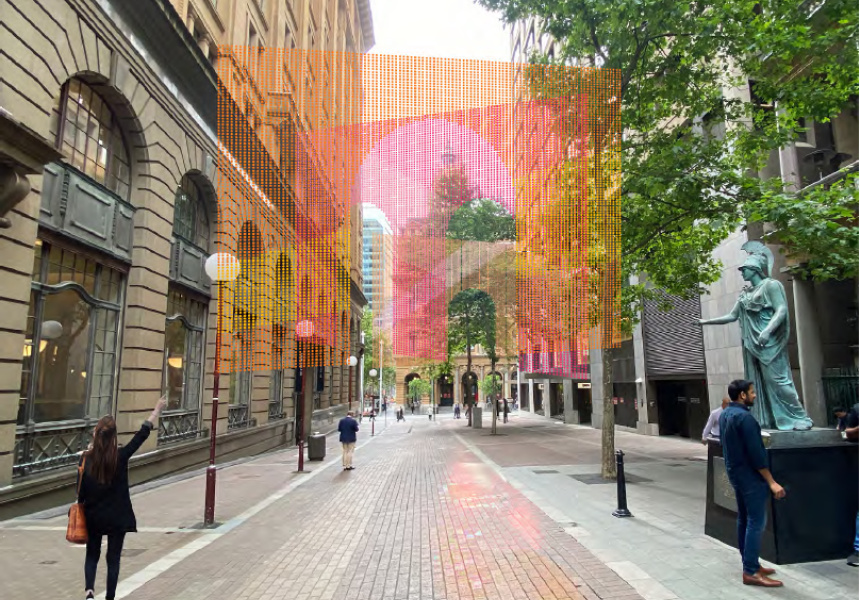 Ever Sun by Rochelle Haley

Photography: Courtesy of City of Sydney
1/3
by Che-Marie Trigg
Share

If you head to Barlow Street in Haymarket between now and July, you might be surprised to find yourself in a micro-forest. Installed by collaborative environmental group Dirt Witches, Barlow Street Forest mirrors a natural ecosystem. It’s planted with more than 30 species from the eastern suburbs’ banksia scrub community, and houses beehives of sugarbag stingless native bees. The forest is set to host a range of talks by scientists, poets, academics environmentalists and artists, all focusing on environmental topics.

The micro-forest is one of four temporary installations popping up in underutilised City of Sydney spaces this month, as part of an attempt to get locals and visitors back into the city centre.

“These four artworks are part of our plan to revitalise the city centre, support local businesses and artists, and create jobs across the summer period,” City of Sydney Lord Mayor Clover Moore said in a statement.

“These works will transform many people’s daily experience of our city and add an element of surprise, humour and intrigue.”

Over on Abercrombie Lane, just off George Street, a pink furry ghost wearing a crown and green shoes dominates a screen. It’s an interactive video installation by Katy B Plummer named We Are All Astonishingly Wise. The ghost will tell your fortune by drawing from a deck of 48 cards. Interpret your own meaning or scan a QR code for a more in-depth reading.

Not too far away, on Barrack Street, a series of giant badges by artist Adam Norton have been mounted atop lampposts. The badges are emblazoned with slogans taken from apocalyptic sci-fi films, pop culture and counterculture, pointing out how climate and global-health emergencies have been predicted for decades. Norton shows how close our current reality has come to science fiction.

And soon to be suspended above Wilmot Street, a lane running adjacent to George and Pitt streets, is Ever Sun, a work by Rochelle Haley. The piece changes in appearance depending on the position of the sun.

“The work is a reminder of the cycles of life as constant and spectacular as the rising and setting of the sun,” Haley said in a statement. “It offers an inspiring space to walk and reflect, feel nurtured by colour and light, and be together in public, sensitively, in a way that reminds us of the resilience, necessity and beauty of art.”

The pieces were created in response to a public call out by the City of Sydney to reanimate the city centre. The four works were chosen from a pool of more than 230, with artists granted up to $50,000 each to make their ideas a reality.