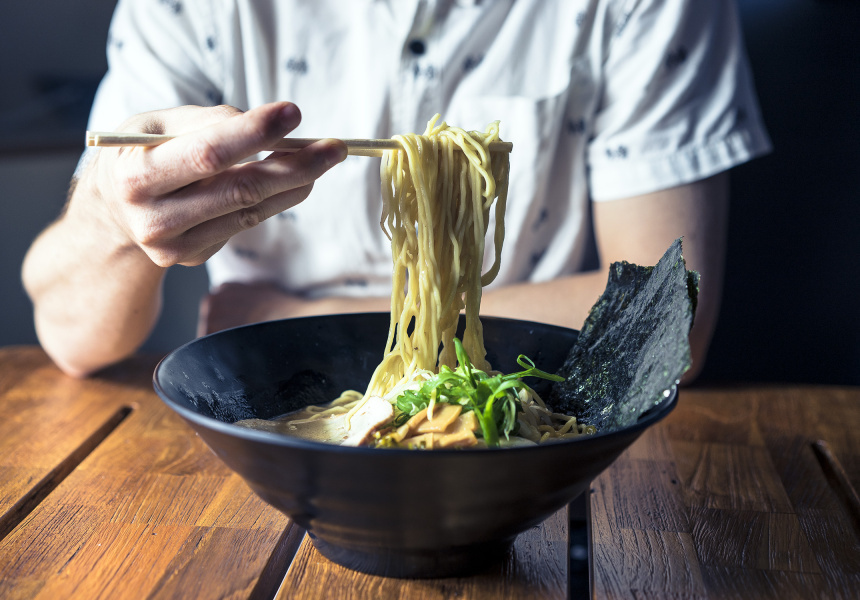 Spice Alley, the Southern Asian street-food market, is home to the Ky-oto stall (among others). It specialises in Japanese comfort food.

There are a lot of culinary traditions in Japan, but Ky-oto chef Jason Chan is concentrating on Japan’s casual cuisine.

One of the most famous dishes is tonkotsu ramen. Osaki’s is still recognisably pork-flavoured, but lighter. It’s an eight-hour broth with bone marrow, leg bones and, contrary to tonkotsu tradition, vegetables. It also uses leek and onion.

The okonomiyaki, the Japanese equivalent of a pancake-pizza, is cooked on a teppan grill and stuffed with pork belly or seafood and topped with dried bonito flakes that dance from the pancake steam as it’s served. The don is appropriately bulky and served with pickles, julienned spring onions and either heavily marinated meat, salmon or a long slab of saucy, fatty eel.

All of it is bewildering cheap, as at Spice Alley’s other hawker stalls. The ramen maxes out at $11, okonomiyaki at $12 and there’s fried chicken and a bowl of udon for less than $10. Unlike the other stalls, Ky-oto has a little themed seated section. Just outside there are wooden benches covered like a Japanese tea house. And there’s a terrace styled with paraphernalia from Sydney’s only sake brewery, Go-Shu.