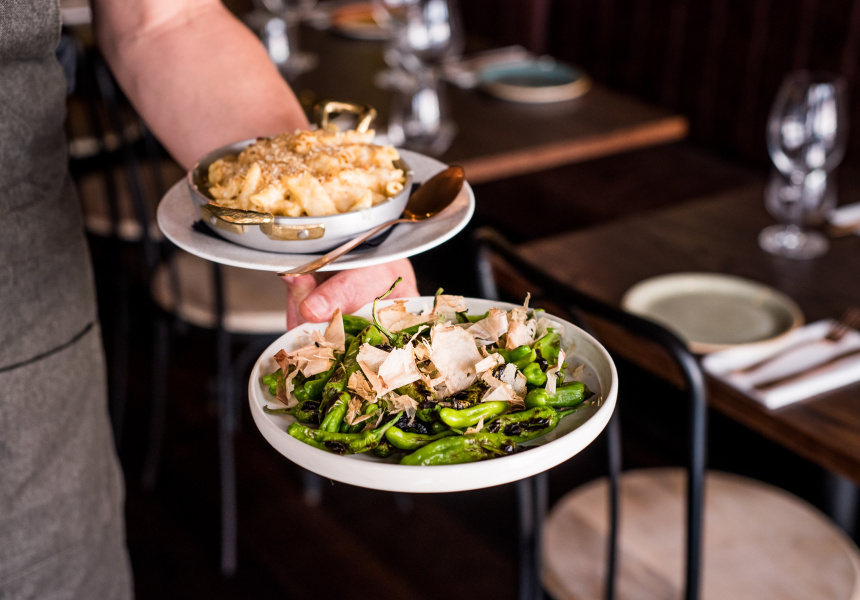 It’s referred to as a New York grill but that’s only part of the story. Back in the kitchen, all the scotch steaks, tenderloins and pork chops are lying over a tray of binchōtan charcoals, the fuel yakitori chefs generally use.

Eastside Grill’s executive chef Arnolfo Raimondi chose the Japanese variety because it burns over a really low temperature, resulting in smoky caramelisation, instead of blackening or char.”

The rest of the menu follows a similar philosophy, mostly American-inspired but multicultural in technique and ingredients. Blistered shishito peppers (a long sour variety from Japan) are dressed in yuzu and topped with flakes of dried, fermented tuna; kurobuta pork skewers are marinated Thai-style and served with pickles that get doused in pickle juice and bourbon at the table.

Then there’s also straight-up Americana dishes such as the truffled mac’n’cheese and a New York cheesecake, both of which come from American head chef Angie Ford. As for the meat, there are four cuts to choose from (all aged and supplied by Vic’s Meat), from a tenderloin to a 250-day aged scotch fillet.

While the food is genre-bending, the visuals are much more thematic. Brass, leather and dark woods punctuate the Chris Wilks design; what you imagine when you think of a New York grill but less family-orientated and more steampunk. This look comes from the copper cutlery, cocktail equipment, elaborate coffee contraptions and two enormous, dream-like murals from Belgium artist Caratoes.