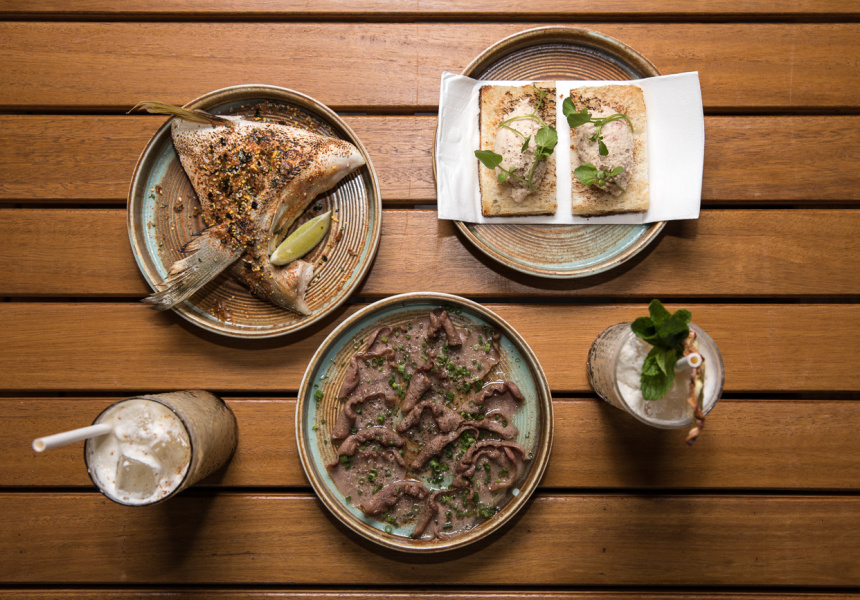 The Poernomo brothers, who own what is likely Sydney’s most popular dessert destination, Koi, opened Monkey’s Corner in August 2017 – a tiny cocktail bar in Chippendale. It’s no bigger than a large pub’s bathroom.

Sweets aren’t the only thing they can do well – the cocktails and spirits list matches up quality-wise to any bar in the area. A lot of that is down to the work of Quynh Van Nguyen (China Diner, Charlie Parker’s), who Arnold Poernomo headhunted to lead the development of the drinks list, and Kennedy CK, who executes it day to day.

The signature is a tart and zesty Pisco Sour infused with pandan and ginger. For something punchier shoot for a salty shichimi (Japanese spice mix) Margarita or a smoky ham-and-pineapple-infused Old Fashioned. There’s Orion and Asahi on tap, a strong whisky list, a seasonal selection of sake and wine, and a fair few mezcals too. If there’s one stylistic umbrella for the lot it’s lightness and subtlety.

The design and food philosophy are both minimal. He didn’t have a lot of choice with the menu – there’s no way to make salty, fatty bar snacks when there’s only one main piece of cooking equipment. Tender shavings of slow-cooked ox tongue are dressed with beef fat, lime and chives; smoked and whipped eel is spooned onto toast; and steamed corn is tossed with popcorn and a gochujang butter.

As there’s only four bar stools, a single communal table and two perches outside, there’s no real place to sit down for a meal so expect everything (besides the sous-vide and blowtorched sirloin) to be snack sized.