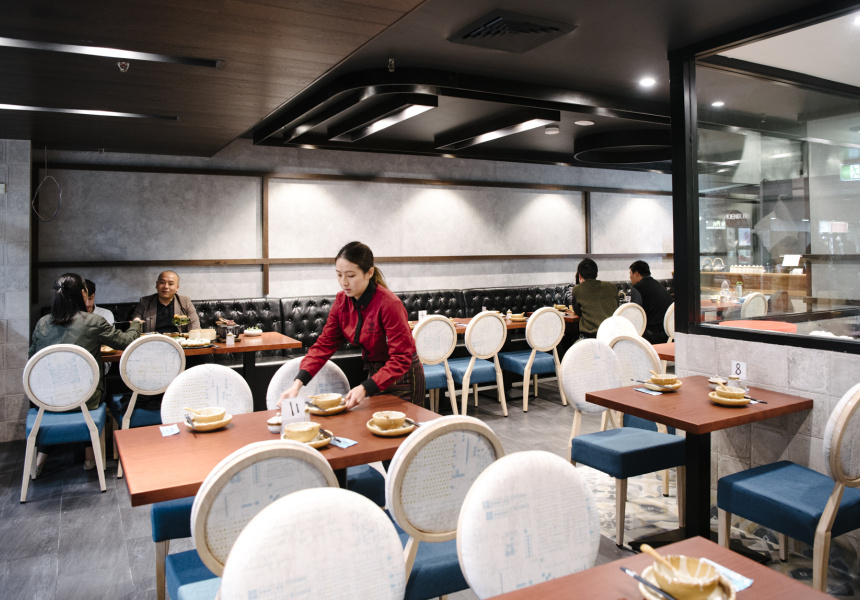 Mr Stonepot was opened in August 2017 by Vincent Lei, the previous owner of Burwood Chinese restaurant, Mr Stonebowl. During Lei’s tenure it was, no exaggeration, one of the busiest restaurants in all of Sydney.

It’s hard to say exactly why Mr Stonebowl was so loved but it’s probably down to the simple fact it was incredibly cheap, delicious and more innovative than the Chinese restaurants around it. His next joint has a different vision. After gaining confidence at Burwood, Lei says he wanted to experiment, to show off what he can do and serve it in a more refined setting.

Hidden in a Chatswood mall, Mr Stonepot retains many of the dishes from Burwood (Shanghainese dumplings, dim sim and Sichuan classics) but with many deluxe additions. Lei brings his extraordinary Jinsha eggplant, a unique eggplant doughnut-like creation showered in a cheesy, salty garlic dust. The squid-ink rice now has gooey cheese, mussels and battered garlic prawns.

Then there are Western-Chinese mix-ups. The ice plant (a crisp and tart beachside succulent) salad with caviar and battered banana served in a halved wine bottle will likely rock a few expectations of what Chinese food can be.

Many dishes, such as the whole barramundi in Singapore-style sweet chilli broth, have been re-plated in a fancier way. It’s the same reason that – despite being in the aged Lemon Grove Shopping Centre – the fit-out and design is more like what you’d expect from a Chinese restaurant opening in the centre of the CBD. It’s dark, vaguely inspired by traditional Chinese architecture and has dumpling-making stations behind glass so you can see the labour behind what you’re eating.