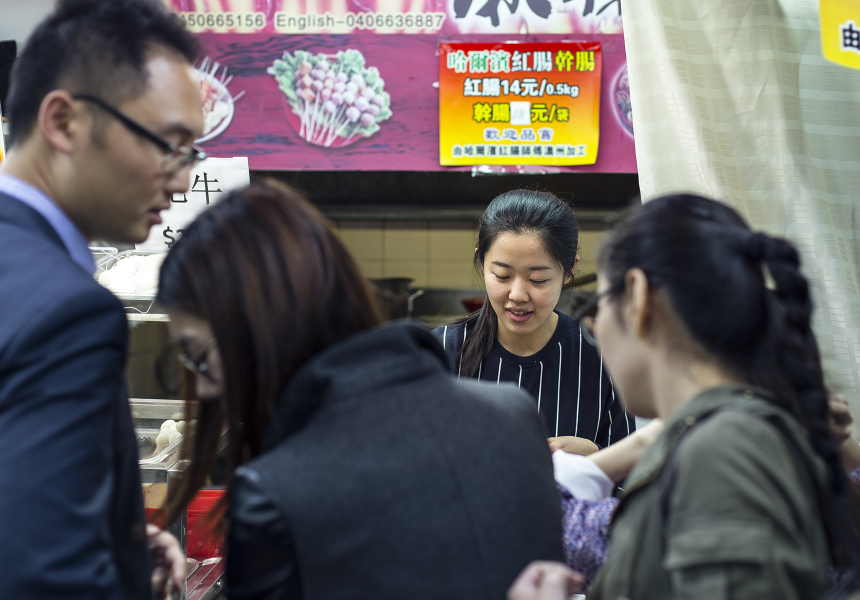 How to order at this Dixon House Food Court stall.

Even among the crowd of food-court stalls at Dixon House, Yang Guo Fu is one of the most confusing for a mono-lingual English speaker. There’s no menu, signage or any indication of how to order food. There’s just a series of shelves stacked with different fresh and preserved Chinese foods.

Malatang is a kind of choose-your-own-adventure hot pot that’s extremely popular in north-east China. Pick up a large silver bowl and some tongs from the counter (unless you’re ravenous, it’s a good idea to go one bowl between two). Pick whatever you want from the shelves and place it in your bowl with some noodles. We recommend the noodles made from green beans, sweet potato or taro. Once you’re done, hand the bowl over the counter and ask for a side of Harbin sausages. The staff will weigh the bowl and give you a price. When the laksa-coloured soup arrives you’ll be asked what sauces you want on top. Owner Wen Xi’s homemade garlic paste and sesame paste give the soup a velvety texture and an extra layer of flavour.

The soup is rich and thick with a distinct flavour not often found in other Chinese cuisines. Wen also makes the stall’s two varieties of sausage, a simple dried-pork variety with star anise, and the Harbin sausage, an eastern-European-like sausage made by an intricate process of roasting and smoking.