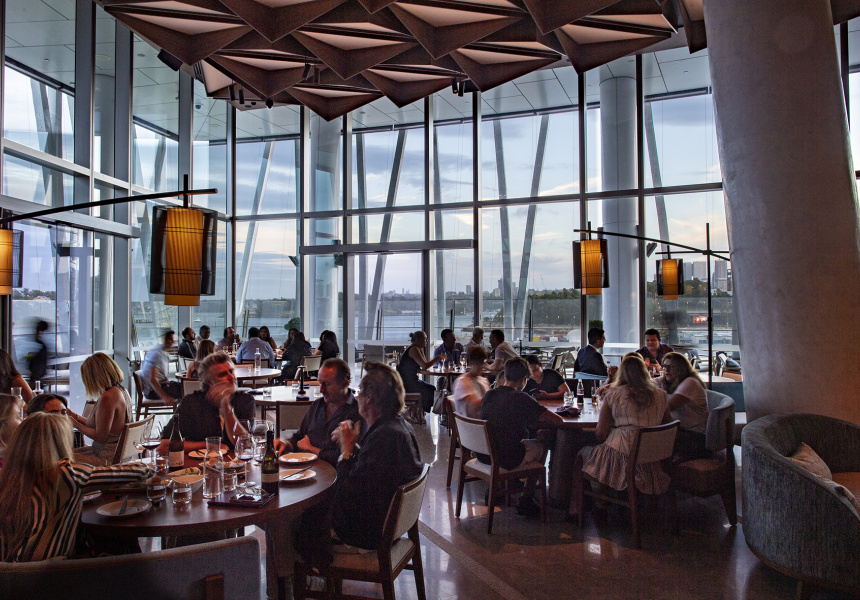 In 2021, the hotly anticipated Sydney outpost of Nobu finally landed on level two of Crown Towers.

The dining room was designed by French architect Severine Tatangelo of California-based Studio PCH, who has been dreaming up spaces for Nobu since 2006. It’s grand, with soaring ceilings that convey a sense of ceremony. It’s Nobu, the room seems to declare; you stand a little taller just being in its presence. The bar is at the centrepiece of the sprawling stage, which overlooks the harbour and takes inspiration from the geometric folds of origami.

Head chef Harold Hurtada has helmed Nobus in Cape Town and Dubai, and has fallen for Sydney and its cornucopia of produce. Head sushi chef Sanghhyeop Kim (ex-Sokyo, Toko) is one to watch, particularly if you’re lucky enough to get a seat at the wooden sushi bar, with your back to the soaring glass walls. Yes, Sydney Harbour is sensational, but it’s not all that often you get to watch someone take their blade to a plump piece of tuna with the precision of a surgeon and the elegance of an artist.

The menu is separated into two parts: Nobu Classic and Nobu Now, then broken down into cold and hot dishes. The best way to experience the menu is to put yourself in Hurtada’s hands and choose the omakase – a seven-course experience for $175.

The journey starts with Nobu Tacos – two-bite starters with fillings such as salmon with spicy miso, and lobster with wasabi sour cream. “Sushi cups” should be knocked back like tequila shots (minus the next-day shame), and are filled with sweet prawn, roe, caviar, uni and freshly grated wasabi. There’s a reason why Nobu is famous for sushi: eating the toro (tuna belly) nigiri feels less like dining and more like being on the receiving end of a magician’s trick; it doesn’t so much melt in your mouth as it evaporates.

The hot dishes include bite-sized balls of baby tiger-prawn tempura with shiitake and fresh chives, and the dish that spawned an empire: black cod marinated in miso, which Hurtada has adapted for Sydney by lightening it with Tasmanian honey. The Peruvian rib-eye steak (currently Japanese A5 Wagyu) is served with Nobu’s signature anticucho sauce. For dessert, the whisky cappuccino from the Nobu Now list is serious competition for Nobu Classic’s baked cheesecake.