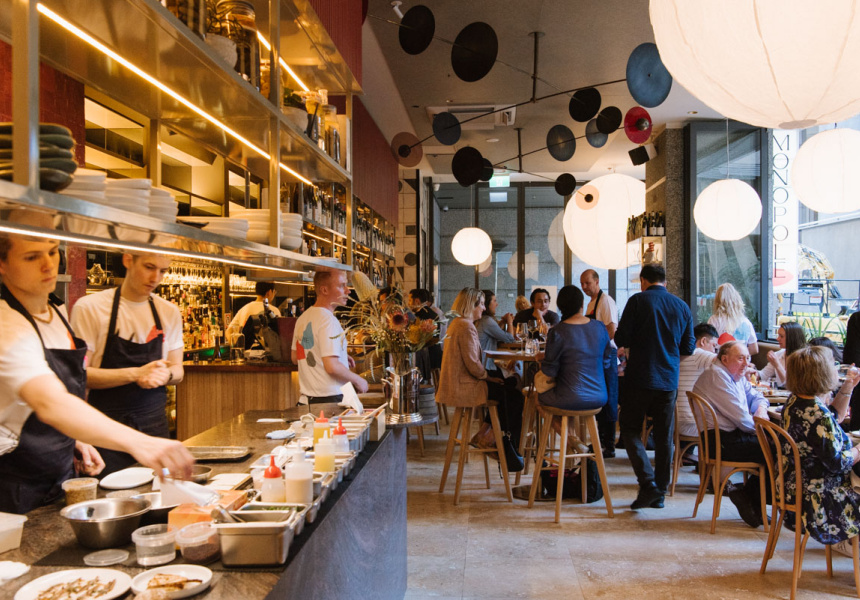 Monopole’s Brent Savage and Nick Hildebrandt (who also operate Bentley Restaurant & Bar, Cirrus and vegetarian fine diner Yellow), had always wanted to move their bustling venue from Potts Point to the CBD. Even the onset of the Covid-19 pandemic couldn't change that. So the pair proceeded, and opened Monopole 2.0 at the end of 2020.

When it opened in Potts Point in 2012, Monopole found many fans for the equal weight it gave its inventively reimagined French bistro fare, and for the diverse and adventurous wines served alongside it – a pioneering concept at the time. And while Sydney’s wine-bar scene has evolved since then, the CBD – despite boasting some of the best cocktail bars in the world – has suffered a dearth of vino venues of Monopole’s calibre.

The harmony between chef Savage’s food and co-owner and sommelier Hildebrandt’s wine list remains at the forefront of Monopole CBD’s mission statement, but their inviting light-filled new city digs couldn’t be in greater contrast to the OG’s dramatically dark moodiness.

The menu has less contrast, in a good way. Savage’s deft manipulation of classic French flavours crafted with seasonal ingredients remains front and centre – think steak, chips and pepper sauce; steamed snapper with leek, capers and butter; or roast peaches with almond ice-cream – but with their brightness amplified to reflect the surrounds.

The city-ready lunch menu, for example, features a tight, restrained play on a niçoise salad, and a Moreton Bay bug sandwich with yuzu mayo that’s destined for “signature dish” status. Another great dish is the harissa-spiced merguez sausage, served in coil on a bed of harissa, dressed with charred, shaved fennel.

The wine list has been reconceptualised. The impressive by-the-glass selection remains, as does the inclusion of a number of innovative winemaking newcomers, but gone is the broad international focus – now, it's just French and Italian wines, with a few classic Aussie drops in there for good measure.