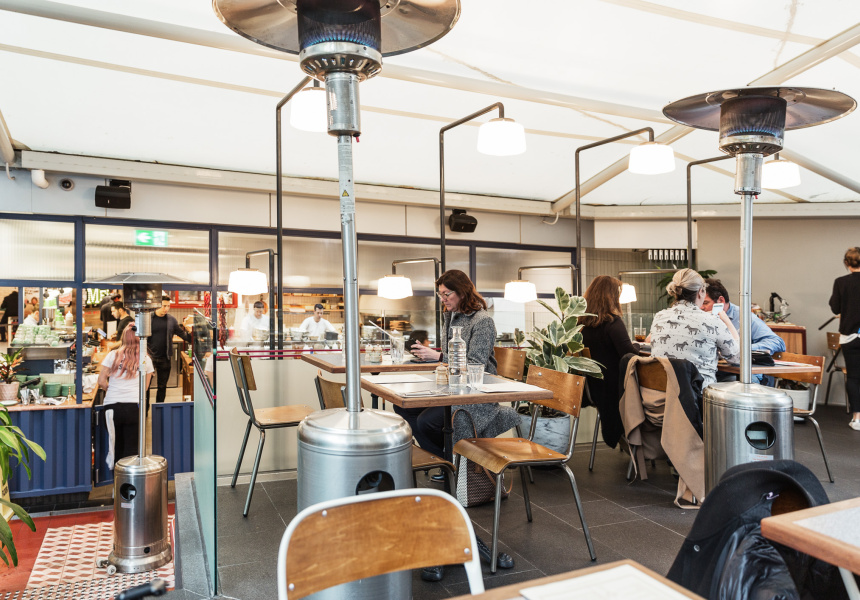 The name comes from the common Australian phrase, which co-owner Chris Lu discovered stemmed from Sydney man Larry Foley – a Sydney bare-knuckle boxer in the 1800s who was in the tabloids at the time for getting paid for his fighting. In tribute to the legend, cartoons of Foley baring his knuckles adorn the menu and the venue’s exterior. Inside, the split-level space is fitted out with retro cream and red leather seating (the colours of the boxing ring).

Pizza is front and centre on the menu but it’s different to what’s served from the food truck, which is (uncertified) Verace Pizza Napoletana. Because delivery is an important part of the restaurant, it needed to change. The result is fluffier than a Roman pizza, but crispier than a Neapolitan.

Pizzas come topped with twists on classics. Their version of a ham and pineapple sees speck sourced from Pino’s Dolce Vita served with pineapple, ricotta, jalapeno and mint. Any pasta sauce can come served on zucchini noodles for a lighter lunch; and there are ciabatta sandwiches too.

But the menu is not entirely Italian. There’s a Middle Eastern lamb-shoulder salad and a fried-chicken sandwich. The breakfast menu includes an acai bowl and a falafel-based vegan bowl.

The venue was designed by Caroline Choker of ACME&CO (the design firm behind [The Grounds], The Grounds in the City and Fred’s. Happy as Larry sources its coffee, pastries and breads from The Grounds.