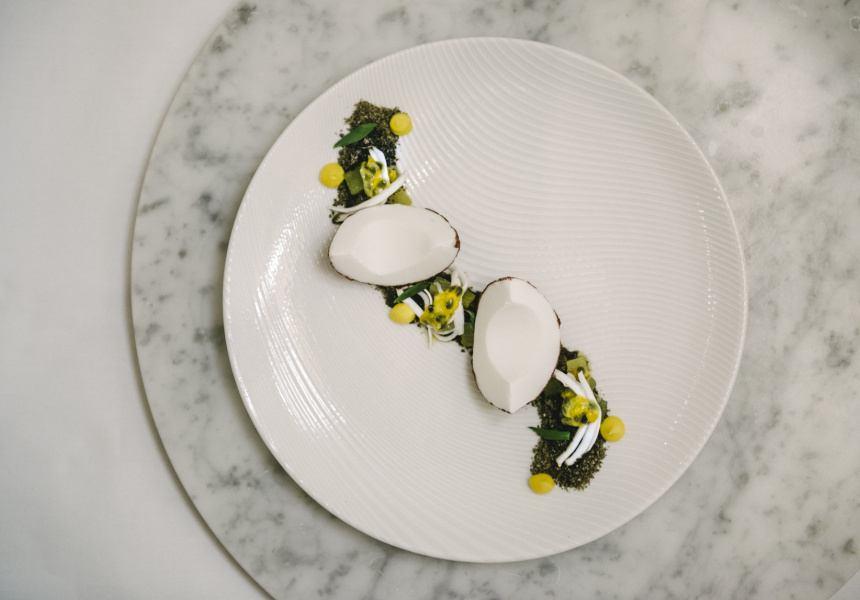 Merivale’s fine-dining restaurant, Est, has proven itself as a mainstay. It’s home to that famous waiter swoop; a graceful service production during which every guest’s order hits the table simultaneously, while the small army of floor staff that delivered them artfully remains behind each chair.

While Est may lack the harbour views of others of its ilk, there’s no shortage of eye candy. Soaring white Grecian columns, ceilings that will give you a crick in the neck and dramatic lighting reflect the refined yet uncluttered menu.

Est celebrates Aussie cuisine with French accents along the way, thanks to executive chef Peter Doyle’s influence. Arriving at Est in 2003, Doyle was a driving force behind the restaurant’s endless roll of accolades. In 2014 he chose head chef Jacob Davey to be his right-hand man.

Together they work on an evolving menu that celebrates local ingredients in delicate, sensory-knocking plates. Take the steamed fillet of Murray cod, shaved abalone, snow peas, black fungi, ginger and green-shallot vinaigrette. It’s an example of the restaurant’s restrained balance of old and new worlds.

If you make it past the champagne trolley that appears at your table at the start of service, sommelier Paul Huet’s encyclopaedic wine list offers rare finds and play-it-safe vintages with a heavy Australian and French contingent. Or, opt for the decade-old signature cocktail, The Celestial, and let gin, elderflower and kaffir lime prime your palate.