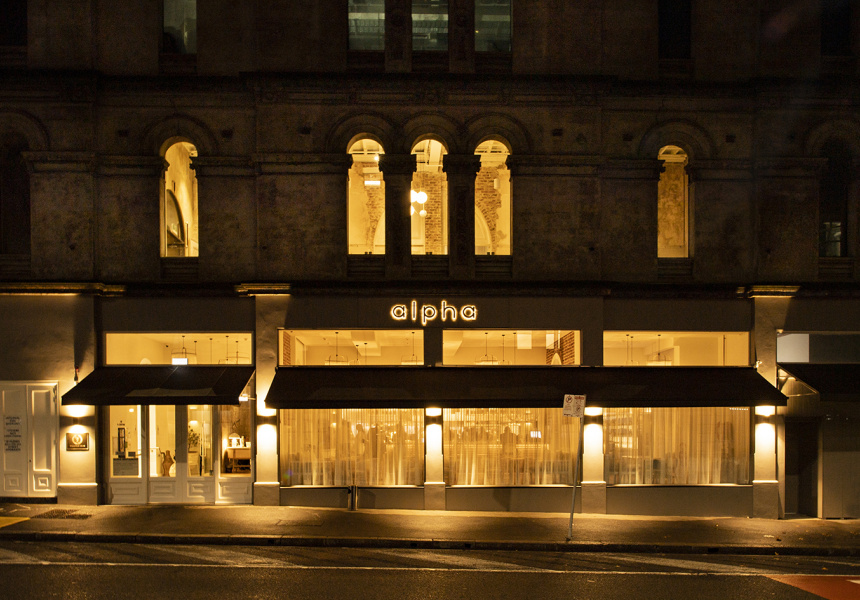 When the Hellenic Club first opened on Elizabeth Street in the late 1950s, it became a meeting place for celebrating and continuing Greek culture in a new country. Peter Conistis first opened his much-loved modern Greek diner Alpha, which was funded by the club, a couple of doors down in 2013, and now, after a multi-million-dollar refurbishment, his cavernous diner is open once again.

Interiors whizz Paul Papadopoulos of DS17 (Nour, Mama Mulan) had excellent bones to work with when he set about reimagining the cavernous space.

He's opted for a relaxed Grecian style expressed via whitewashed walls, oak floors, Thonet chairs and layered grey fabrics. There are Greek-inspired curves and arches on the enormous fluted marble bar, at the wait stations, in the timber work and in the bespoke marble table lamps. There’s not a sharp edge in sight.

The open, stage-like kitchen creates a theatrical backdrop to the dining experience, while the famed stone-panelled wall, deeply engraved with Greek letters, has been expanded to include two more that had been lost (Papadopoulos found them upstairs, in the bin). On the other side of the room, the backlit wine cellar is on display.

The old Alpha had a tiny kitchen; the new one has an elaborate open stage. The woodfired oven took eight years to get approved (it’s a heritage-listed building) and Conistis and head chef James Roberts (Beta Bar, ex-Salt Meats Cheese) are making the most of their new toy.

The bar menu offers osetra caviar imported from Greece and Conistis’s tongue-in-cheek take on pigs in blankets – Greek sausages wrapped in tsoureki (a sweet brioche-like bread). Behind the bar, Conistis’s Bloody Alpha is made with vodka infused with sundried tomatoes, fresh horseradish and chilli, and served on ice cubes made of tomato juice. Almost half of the wine list is Greek, while the remainder is Australian.

Most of the original menu has been changed. But there are three dishes that Conistis says will always be on the menu: his moussaka with scallops, a slow-roasted lamb and the much-loved original Alpha spanakopita. Conistis is following a nose-to-tail ethos, and no dish on the menu embodies that more than kokoretsi.

Traditionally served at Easter, the dish is made by wrapping offal with sausage casing (rather than stuffing the casing with the offal) and served with a wild oregano and lemon dressing. Also on the menu is a suckling lamb on the spit, and a Greek-style spit-roast chicken that has been brined in feta, twice-cooked, and is served with a watermelon and feta salad.