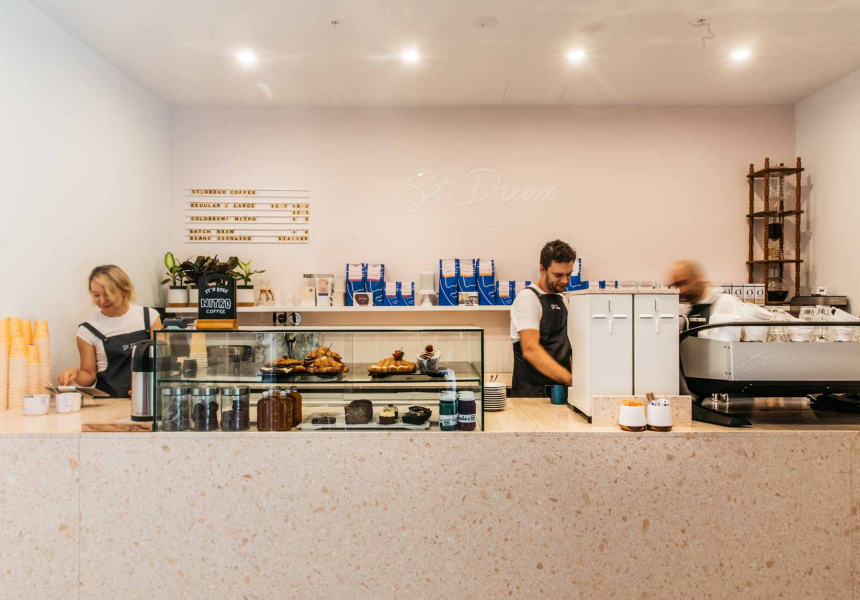 Saint Dreux was a French shepherd in the 12th century, who many say is the patron saint for coffee houses and baristas because of his proficiency at handling multiple tasks. It’s a fitting name for the multi-tasking duo behind St Dreux.

Founders Raf Bartkowski and Ernest Igual met while working at Sydney coffee brand Campos, and soon found that their skill-sets complemented one another. Igual is a certified Q trader, which is the highest globally recognised coffee accolade achievable, a title held by fewer than 100 people in Australia. Combined, the two men bring 30 years of experience to St Dreux.

There are three signature blends on offer, tailored the three roast styles: the Shepherd (light), the Silver Bullet (medium) and the Rainmaker (dark). These are complemented by a range of micro-lot single-origin beans Igual sources directly from the farmers.

Coffee is king at St Dreux, where cups and beans are sold with a card detailing the flavour profile, brew guide and origin. The single-origin cards delve even further into the provenance, referencing the grower’s story and their farm, plus the region, varietal, elevation and process. It’s a thoughtful detail that feeds into their mission to build community by going beyond just offering great coffee – it empowers customers with education and skills to make a great cup at home.

The nitro brew is perhaps best left to the experts, though, and here it’s cold brewed for 12 to 16 hours then infused with nitrogen, creating a silky mouthfeel and beer-like head when poured.

In-house pastry chef Sandra Baltar is behind the menu. There are stuffed croissants with fillings such as sautéed mushrooms and fresh fig, prosciutto and Paesanella ricotta, alongside a selection of vegan sweets.