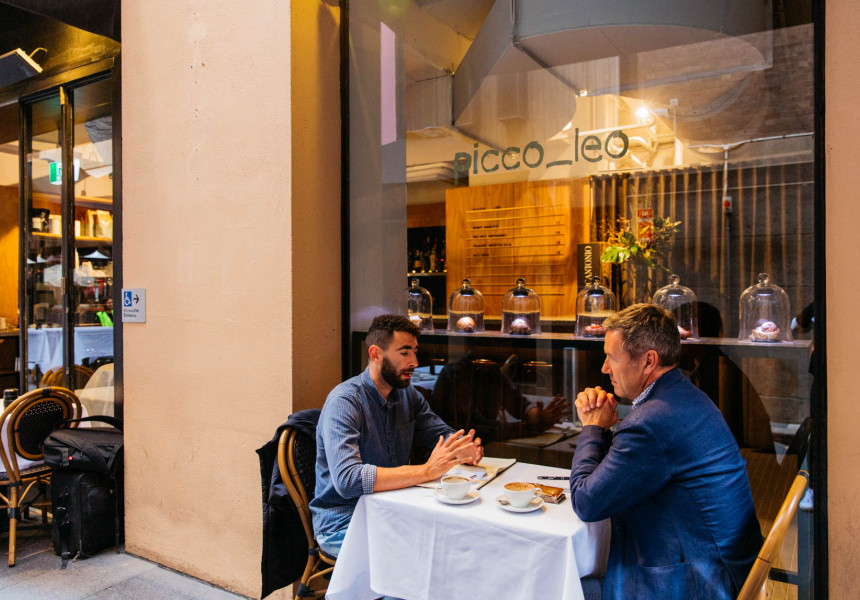 Picco Leo is the Italian diner's casual offshoot. During the week it's a cafe and bakery selling Roman-style pizza slices and ciabatta sandwiches alongside a rotating menu of baked goods such as star anise and cinnamon scrolls and black-gold truffle croissants. You can grab-and-go or sit in and enjoy a glass of vino, a cocktail or a coffee with your lunch.

And in the evenings it transforms into an aperitivo bar. The menu and drinks list might be short, and there’s not too much seating, but it’s an example of good things coming in small packages.

To design the cocktail list, the owners partnered with Antonello Arzedi, who worked behind the bar at Scout in Surry Hills. Their creations don’t look spectacular, but they certainly taste it. Everything’s batch-made and charged in-house, using a gas system set up behind the bar. The Ruby Spritz is made using rhubarb juice the chefs clarify themselves; Negronis are made with strawberry consommé infused with fresh lemon leaves; and the Travel Nostalgia has a banana base made from both the fruit and its skin, accented with miso to deliver depth and coffee liqueur for a kick. Those with a preference for vino can order from Restaurant Leo’s wine list and chat to its sommelier.

Cocktails change with the seasons and the produce Firla and Zanellato can source at local markets. This focus on beautiful, season-driven produce extends to the food. There are some fixed snacks on the menu, including oysters, house-made bread and charred peppers, but the rest regularly changes.