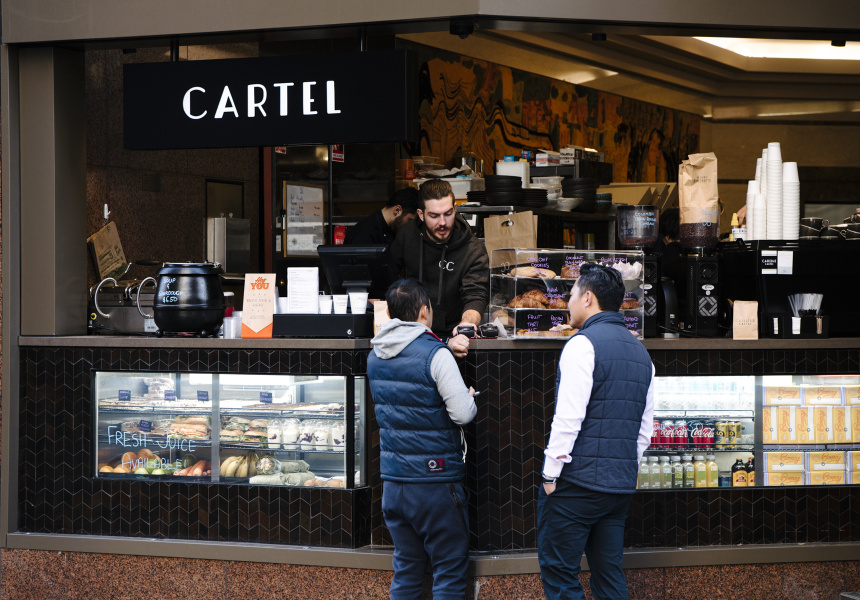 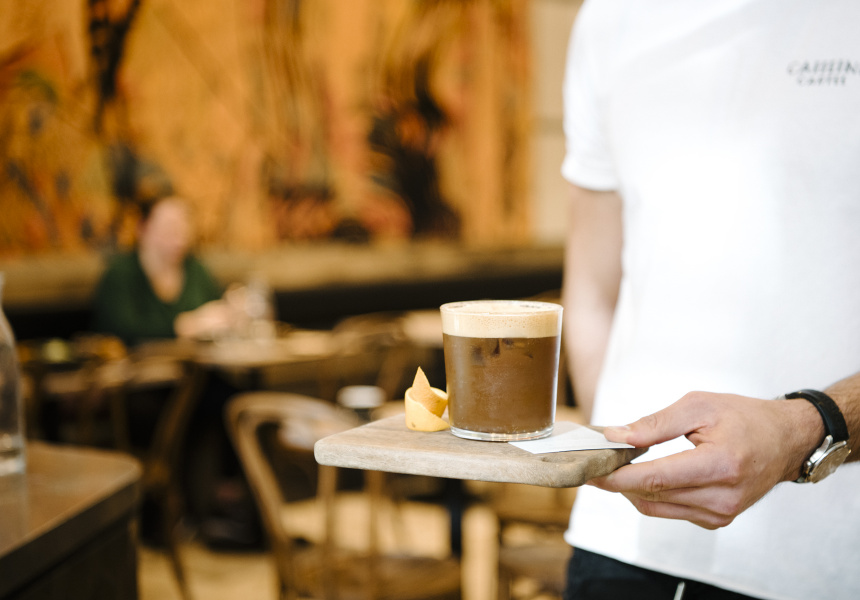 It took two years of hard work before Caffeine Cartel finally opened for business in the lobby of the United Overseas Bank (UOB) building on Martin Place in June 2018, with owner Daniel Drakopoulos following in the footsteps of his entrepreneurial father Bill Drakopoulos (the man behind the Sydney Restaurant Group, which is responsible for Ripples, Ormeggio at The Spit and LuMi).

The brown herringbone-tiled space extends an invitation to dine-in, or take away from its retractable service windows, which face out. A glass cabinet is filled to the brim with pastries, while sandwiches are neatly arranged on the coffee counter. While you wait, you can retreat from Martin Place and take a seat in the lobby of the UOB building and be served by one of the friendly staff.

Typical brews – including a bottomless batch brew – using a Little Marionette coffee blend exclusive to the cafe (Blend 88) are on offer. For a bit of zing, try the espresso tonic with a splash of yuzu.

There’s also a frappe, but not the fruity kind. This one is a traditional Greek iced-coffee, using imported Greek instant coffee, water and sugar, before a handstick blender is used to create a foam top. It’s finished off with a splash of milk.

If you’re skipping caffeine altogether, take them up on one of their fresh juices.

The tiny kitchen plates up crushed avocado with house-made dukkah, goat’s cheese and a boiled egg on buttered wholegrain toast with rocket for breakfast.

Come lunchtime, it’s all about generous bowls such as the naked-burrito bowl with pulled pork or chicken, black beans, capsicum, quinoa, kumera (a variety of sweet potato), jalapeno, guacamole, sour cream and lime. Or, in a hurry? Pick up the triple-cheese white-sourdough toastie that oozes with the piping-hot “cheese of the day”, and is stacked with caramelised onion, which cuts through.