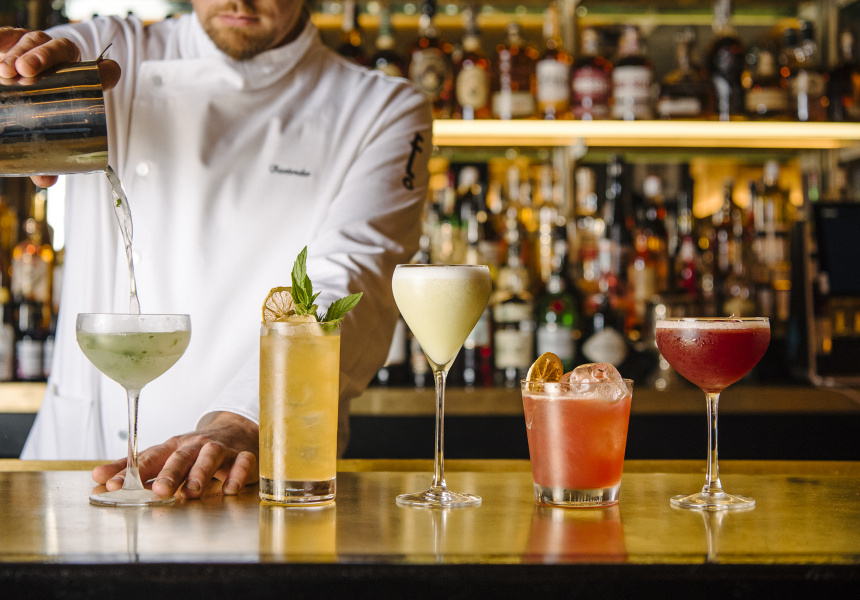 Like ordering a pastrami sandwich at Katz’s Deli and visiting the Guggenheim, sipping a cocktail at Employees Only in the West Village is one of those seminal New York experiences.

The bar, which opened in 2004 with an unassuming door and a notoriously misleading “Psychic” neon sign, was a pioneer of the city’s reinvented cocktail scene, forging the path that PDT, Death & Co. and other Manhattan institutions would follow (although go down the stairs and there, behind a curtain, is the psychic in person, a women telling people's fortunes to whoever wants to listen.) It’s since come to be regarded as one of the best cocktail bars in the world, thanks to its well crafted but evolving cocktail list and switched-on staff.

This outpost – the first in Australia and the sixth globally – opened in 2018. It’s run by Dushan Zaric, one of the guys who set up the original. The bar serves some of the signature cocktails created in New York, including the Amelia, with vodka, elderflower liquor, pureed blackberries and fresh lemon and the Billionaire, with absinthe, high-ABV bourbon and house-made pomegranate grenadine. Leading the charge of localised content is the cheekily named Down Payment, which blends Barsol Pisco, fresh lime, Strega, Suze (both herbal liqueurs) and, yes really, avocado (get it?).

Food is also a big part of the experience. There are two menus: a full list of dinner items and an all-night snacks list, available 11pm to 2.30am. They are punctuated by the venue’s signature French-via-New York fare, such as steak tartare, bone marrow and lamb chops. Local additions include a squid-ink risotto studded with Hawkesbury calamari and topped with lemon pangrattato (breadcrumbs), and a chargrilled rib eye with watercress and horseradish. If you’re going all out, there’s a full caviar service, with a choice of roe (smoked salmon, oscietra or white sturgeon) accompanied by chive crème fraiche and blinis.

The bar is located in a heritage-listed, semi-hidden basement near George Street and Martin Place. The dark timber and brass highlights of Tim Leveson’s interior design (The Sandwich Shop, Pane e Cipolla) are spiked with illumination from skylights around the room’s edges.