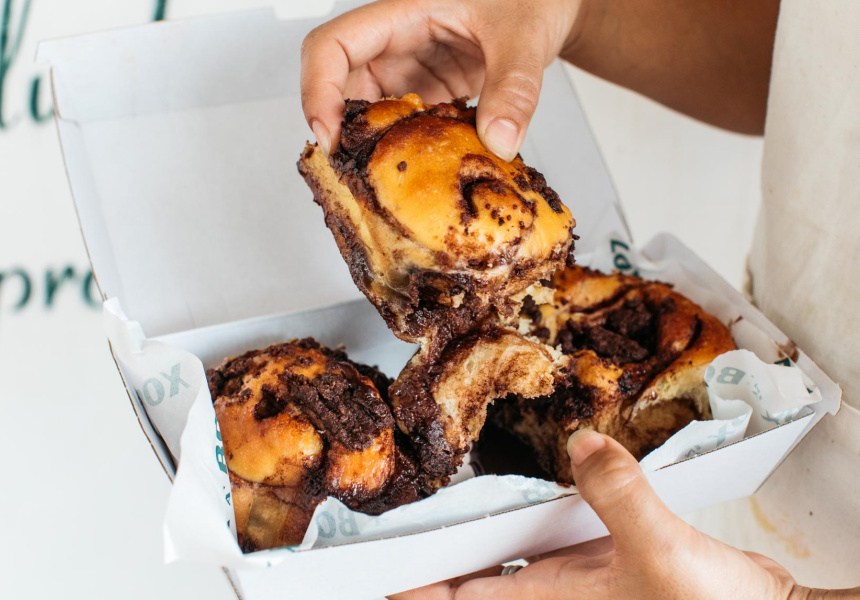 Like many great things in life, Lox in a Box came about by accident. Candy Berger was hunting for sites in Sydney to open a sit-down deli and base her catering business, Fed Kitchen. But then a fateful brainstorming session hijacked her destiny. Her wife Gaia Lovell suggested that once they opened their deli, they would be able to call their takeaway boxes Lox in a Box. The quip was so good that it made her change tack. She decided to dump the deli in favour of a bagel-and-schmear [spread] delivery service.

One week later, Berger drove past a cute ex-takeaway shop with stained-glass windows and a retro vibe at Bondi’s Seven Ways. It was the perfect spot. It seems the customers – who regularly sit out on benches under the glorious paperbark tress in front of the shop, eating bagels stuffed with lox and hot salt-beef - would agree.

The deli window is open on Fridays, Saturdays and Sundays only. That’s when punters can stop by to grab Jewish deli goods to take home – lox, schmears, egg mayo, pickles, chopped liver, Pepe Saya butter and more – as well as bagels made to order and babka (a yeast cake made from twisted dough, usually with chocolate or cinnamon).

The menu is short: there’s the classic lox bagel (salmon, herbed cream-cheese schmear, tomato, capers and onions); veggie (jalapeno schmear, carrot, beets, rocket, onion and cheese); and a salt-beef number with mustard and pickles. If you add on the crinkle-cut crisps and pickles your order is served in an open box, the sides nuzzled up against your bagel, which is cut in half with the cross-section facing up to show off the generous fillings.