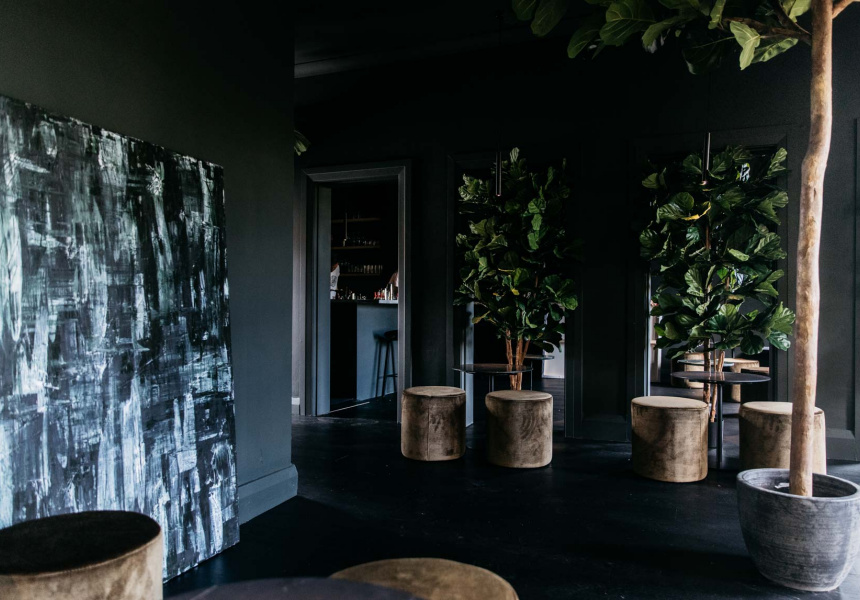 To get to Scout, climb up a steep set of stairs to the top floor of The Dolphin Hotel in Surry Hills. Can’t get in? That’s because you need a code to enter. If you’re a walk-in, the bar downstairs can tell you the code. If you book online, Scout will send it to you. The drama at the door is a prelude to the magic that goes on up the stairs and behind the bar.

Scout is from the creative mind of Matt Whiley, whose Scout bar in London currently ranks at number 28 on the World’s Best Bars list. Whiley is known for a mad-scientist approach to drinks; The Dolphin’s basement has basically been turned into a lab. It’s serious stuff. And it’s stocked with the sort of equipment usually used by people in lab coats: there’s a centrifuge to separate solids out of liquids, and an evaporator Whiley uses for distillation. He ferments bananas, watermelon and citrus to make wine, and distils peaches to make gin.

Despite the geekery, Whiley’s attention is on the ingredients he uses to make his drinks, not the fancy gear. At Scout Sydney, those ingredients include native wax leaf foraged in Marrickville, pepper berry, lemon myrtle and geranium, which he uses to perfume drinks. But it never feels tokenistic.

Alongside the native ingredients he’s making the most of produce that may seem mundane to Australians but is exciting to someone from a place where parsnips and sprouts are more common than tropical fruits.

The Hall Street Fizz is made with matcha green tea rum, lychee, fermented oats and coconut oil; the Haymarket with a spicy-sounding combo of vodka, ginger, chilli, Thai basil, lime leaf, lemongrass and lime; and a vodka soda with strawberry gum vodka and green ant soda, which has been brewed in collaboration with local bar PS40.

The drinks list will change regularly, depending not only on seasons, but on how much of each they can realistically make.

Scout keeps the wine drinkers happy too. Western Australian winemaker Ben Gould is one of the suppliers, and there’s also orange wine from South Australia.

In London, the bar is highly regarded for its food, which often uses produce left over from the drinks-making process. Highlights on the menu include celery blue cheese with smoked almond, peach with tomato and lemon balm, and chicken Waldorf finger sandwiches.

Scout’s interior is about contrasting with the sunshine of its surrounds. It’s all dark timbers, forest greens and trees spread throughout to create nooks and crannies to hide in.