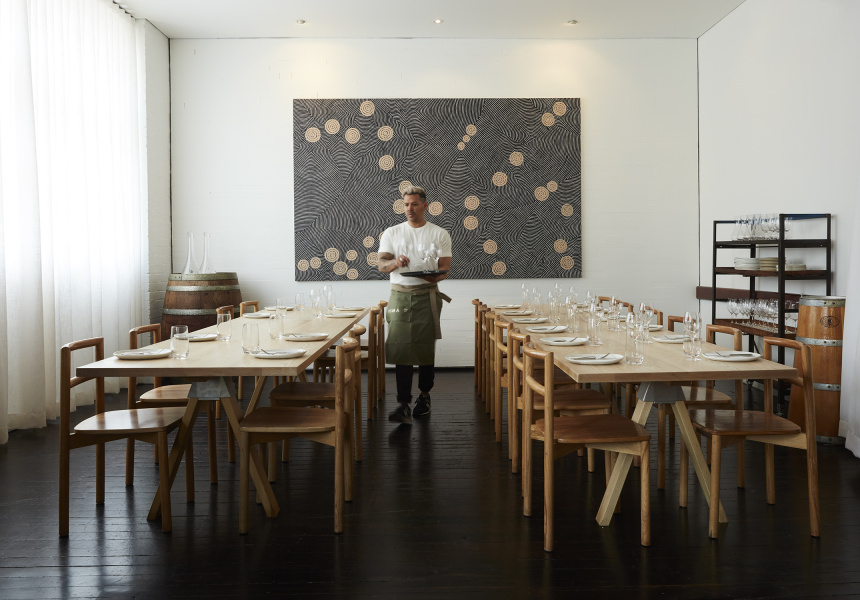 In September 2019, a electrical fire at Surry Hills restaurant and cellar door Nomad forced owners Al and Rebecca Yazbek to shut down. While they restore and upgrade the well-loved eatery, they're keeping the Nomad dream alive in a temporary home.

The pop-up is called Nomad Up the Road and, true to its name, it’s located up the road from the original, in the vast corner space that was home to Longrain for more than 20 years.

After Longrain shut, Adelaide restaurant Orana moved in for a short Sydney residency (it was actually Orana owner Jock Zonfrillo’s idea for Nomad to move into the venue in the first place). Orana created a space that looked nothing like the minimalist design of the previous restaurant, amping up the drama with dim lighting and a large-scale installation of dried flowers hanging from the ceiling. Nomad has changed it once again, painting the walls white and featuring light tones and soft hues, in keeping with the aesthetic of the original Nomad space.

None of the furniture was damaged in the fire, so they’ve brought it all across (and reconditioned the pieces), which also helps make the 140-seat space feel more familiar. An artwork by CJ Hendry that used to hang over the dining room will be there, along with other works (all for sale) by some of the team’s favourite Australian artists.

The new kitchen was partly obscured, but has been cut down to mimic the open kitchen of the original. The menu, like the space, still feels like Nomad. Dishes are still inspired by the Mediterranean, but because there isn’t a woodfired oven or a flame grill, Challinor and the team have had to create new recipes. This includes the bread, which is simple but a standout. Regulars will recognise dishes such as the cannellini-bean hummus with cumin burnt butter, but there are also newbies such as a salted-kingfish croquette with charcuterie XO and finger lime, and potted mud crab with a piment d’espelette (hot pepper) butter.

You can expect a thoughtful wine list of mostly Australian varietals, with custom house wines by Orange winery Gilbert Family Wines and Victoria’s By Farr. There’s a fresh cocktail list, as well as spirits, beers, ciders and non-alcoholic options (such as the aptly named “Nogroni”).