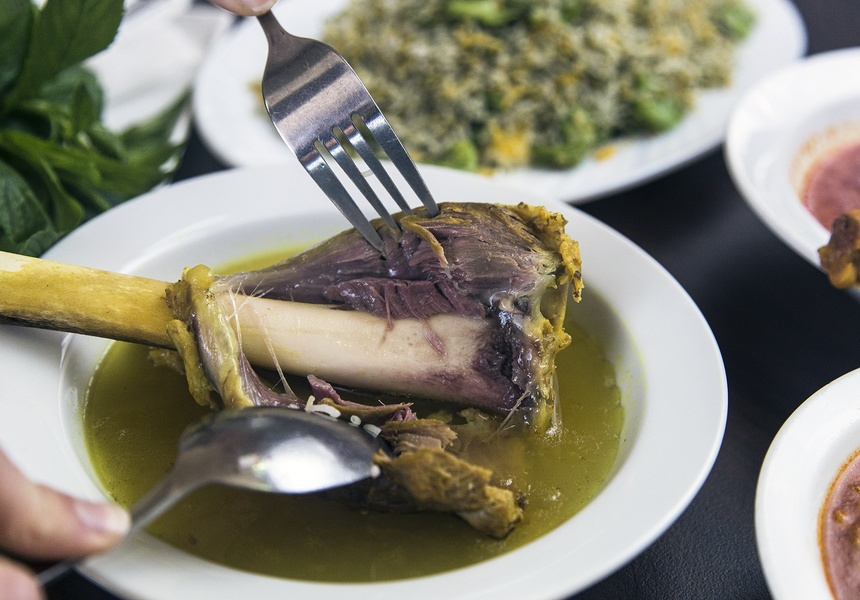 Morteza Hemmati’s restaurant has been serving traditional Persian food for almost 10 years at Darband. He says the only difference between the food he serves and what you’d find inside an Iranian home is that an experienced chef is making it. “Persian food is simple and homely and that’s how Darband feels.” The restaurant isn’t much to look at, but it hardly matters.

Like Auburn, Iranian food (also commonly called Persian food) is rather heterogeneous. The cuisine shares a lot of dishes and cooking methods from its neighbours. The national dish (according to Hemmati, it’s a point of contention) is chelow kabab, or grilled meat skewers with herbed rice. It’s common in different variations throughout East Asia and south-west Europe. Hemmati’s version – cooked over hot charcoals and served with half-charred grilled tomatoes and perfectly fluffy saffron rice – is true to the northern Iranian style. The four options of chicken, lamb, lamb mince and lamb back strap come either marinated in lemon juice, minced onion or a mix of both.

Traditionally, chelow kabab is served with doogh, a sour yoghurt drink not dissimilar to Turkish or Baltic ayran. Hemmati’s homemade doogh is salty, slightly thick and comes either fizzy or flat but always brimming with shredded mint.

With chelow kabab dishes dominating half the menu, Darband is an accurate reflection of meat-and-rice-heavy Persian food. The other half of the menu consists mainly of two enormous and absurdly cheap rice platters each with a different stewed meat. The first, zereshk polo, is chicken – doused in glutinous seasoned oil – that’s so tender, the edges of the bones are soft. It comes with a plate of saffron rice riddled with dried barberries. The lamb shank in baghali polo comes with buttery rice mixed with broadbeans and dried dill. The lamb itself can’t withstand a basic prod without completely falling apart. Some Darband regulars ask for a straw so they can suck the bone marrow right out of the shank’s centre.

The remaining items on the menu seem like side dishes because of how inexpensive they are, but they’re meals in themselves. The stews mix popular Iranian regulars such as the babaganoush cousin, kashk-e-bademjan, with the more perplexing gheimeh, a lamb, split pea and dried lime stew that’s covered in French fries. We asked Hemmati, why chips? Traditionally it’s either served with eggplant or chips but Hemmati serves his with fries simply because “they’re really tasty.”