Ahead of the MCA Zine Fair this weekend, we chat to zine maker Lee Tran Lam about the personal and quirky world of zines. 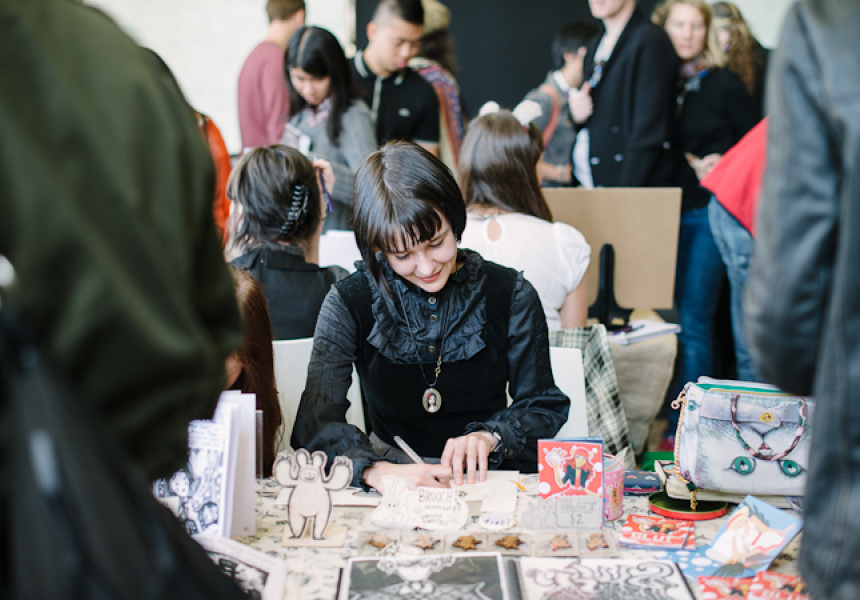 One suspects Lee Tran Lam has taken hold of Hermione Granger’s time turner with all that she fits into her life. Managing editor of Inside Out, she fills her spare time running the food blog, The Unbearable Lightness of Being Hungry, presenting FBi show Local Fidelity and she has been making zines for the better part of two decades.

Broadsheet: Why do you spend so much time making zines?

Lee Tran Lam: I started making zines as a teenager (18 years ago!). Zines are something anyone can make, which is a big part of their charm. Back then, you’d probably make a zine, just as you’d fire up a Tumblr or Instagram account today – all you needed was a photocopier, a gluestick, scissors and paper and you had enough to stitch together your own one-of-a-kind look at the world.

Zines are as personal as their creator, which is why they’re so fascinating and unique. I’ve seen a zine solely about guitar pedals, a zine about yum cha, a zine about every Vinnies op shop in Sydney (that was by Vanessa Berry and she really did hit every St Vincent de Pauls thrift store in town) and much more! The original zines were sci-fi fanzines followed by music fanzines – and anything made by fans always has a likeable energy to it.

BS: Tell us about your zines, what topics do they cover?

LTL: I’ve made zines on lots of obsessions – food, Japan, France, travel, music to name a few. I’ve had my zine land in libraries in Manly and St Paul, Minnesota. I’ve gotten zine requests from a wine bar in Spain and Anthony Bourdain’s TV show producer! It’s amazing to get orders for your zine from places far beyond the MCA Zine Fair – Switzerland, Malaysia and Japan are a few places I’ve sent orders to!

BS: How would one go about creating a charming and successful zine?

LTL: One: make it about something you’re really keen on and obsessed with – something that gives you a buzz. That infectiousness will translate to anyone who picks up your zine. Plus, you will probably still be stapling zines at 3am before zine fair starts, so you’ll need that fandom and momentum to keep you going!

Two: make it individual – whether it’s making every copy of your zine different in some way (drawings, photos, adding something unique to each cover or giving it a hand-made touch) or just offering a personal view of the world unlike anyone else’s.

Three: zines are one of the few “media outlets” that are unconcerned with sales figures, reader numbers and trends. So take advantage of that freedom. Zines are so different to other forms of print publishing – so make it stand out by going against all the typical clickbait headlines or editorial hooks that make everything you read so samey.

BS: What zines will you be selling at the MCA Zine Fair?

LTL: I’m currently finishing two zines for the MCA Zine Fair. One is the 2015 update of The Unbearable Lightness of Being Hungry zine I did last year. I call it the “snack-sized” edition of my blog, where I compile some of my favourite places to eat into a zine, and also add lots of personal flourishes – I’ll stick in an actual photo, I’ll punch the tag that I’ll tie to the front cover, I’ll hand-stamp pictures on the pages, stick in extra papers, and so on. You can see examples from last year on my blog.

The other zine (which I just finished writing at 3am this morning, before going to work!) is a zine of “short-ish stories” called A Library Card Is Not A Licence To Romance. They’re short pieces of fiction that I scribbled very quickly. This zine will also have personal touches, like a matte photo clipped to the front cover and other individual effects.

Lee Tran Lam will be at the MCA Zine Fair on Saturday only, and zines left over will be for sale at leetranlam.bigcartel.com.

The MCA Zine Fair is part of Sydney Writers’ Festival and supported by VIVID festival. It’s a free event on levels two and three of the MCA this Friday from 5pm–9pm; Saturday and Sunday from 10am–6pm.