Built in 1939, the former office building has been transformed into a five-star hotel with a rooftop pool. 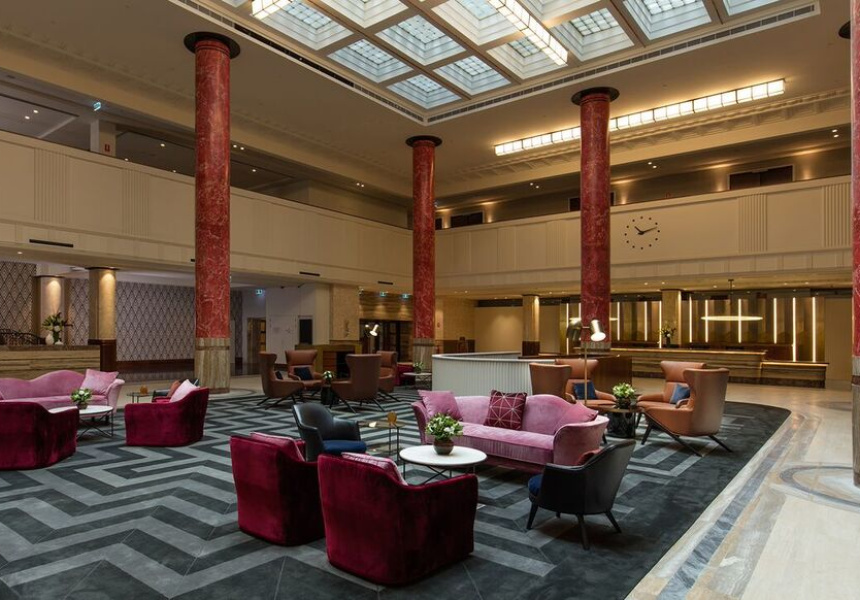 Launching quietly before Christmas, the new Primus Hotel Sydney is one of the city’s most glamorous venues.

“There is simply no other space like it in Sydney,” says Jonathan Bryant, associate director of GBA Heritage, the local firm recruited to create a conservation management plan for the heritage-listed building.

Located at 339 Pitt Street, the new hotel housed the Sydney Water Board’s offices from the building’s construction in 1939 until 2009. A faithful restoration led by Sydney-based architects Woods Bagot in conjunction with GBA Heritage has seen many of the building’s original features retained, including its striking terracotta-tiled façade.

The former Sydney Water Rating Chamber, once a bustling office space, is now the hotel’s lobby, a grand room with cathedral-like dimensions. Eight spectacular red scagliola columns, each eight metres tall, surround a large, beautifully restored skylight. The building is a “marvelous artifact” from the late ‘30s, Bryant says. “Incredibly lavish materials were used and generous spatial proportions [were] employed that would never be repeated,” he marvels.

Accommodation is available in 172 luxuriously appointed rooms located across six storeys of suites. Three levels of room are on offer: executive, featuring a bath; superior and twin. The hotel is aimed at the top of the market, with a presidential suite and ballroom also among its features.

Crowning the hotel is a rooftop pool and bar, which will look directly on to the next Sydney development planned by the Greenland Group, owners of the Primus: a 240-metre residential tower at 115 Bathurst Street. A proposed new laneway will link the luxury hotel with what will be the city’s tallest apartment block.