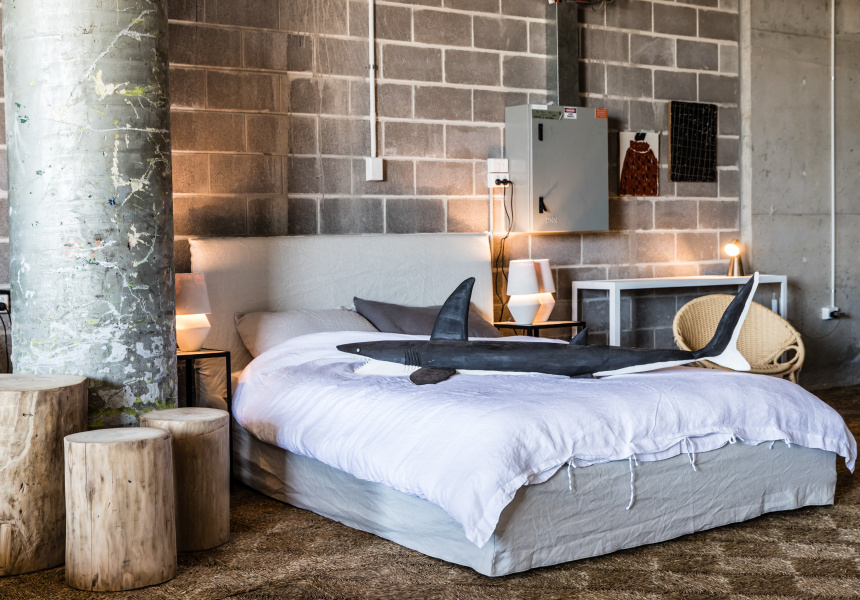 Even if you haven’t heard of Surry Hills-based furniture brand MCM House, it’s possible you’ve sat on one of its loose-covered linen sofas. Or eaten at one of its timber dining tables.

Charlie Hinckfuss, designer and founder of MCM House, has been helping Australian homes dress better since 2008. He’s also custom-designed furniture for restaurants Blanca, The Grounds and Aria, to name a few. With a studio in Surry Hills and a test store in Melbourne, a pop-up showroom in Bondi, called MCM Beach Club, was the next move.

“I have been a Bondi boy for the last eight years, so I jumped at the chance to do something at the beach,” says Hinckfuss.

The collection is artfully chosen (right down to the photographs on the walls) and hemmed in by cacti and succulents. It includes furniture, lighting, accessories and textiles. Deep-seated couches in natural fibres, deliberately crinkled to avoid feeling over designed, sit in front of solid-timber coffee tables. Asymmetrical lamps sit on marble side tables.

The idea was to make well-designed, luxurious interiors accessible to the masses. “I wanted to bring something new to the market that’s affordable,” says Hinckfuss. “It’s classic, contemporary design using natural materials with a sense of travel.”

The designer is on a roll. His work has been featured in some of Sydney’s finest homes, and he has created a series of island-white tables and chairs called “The Terzini” for his brother-in-law, Maurice Terzini. You can find them at Da Orazio Pizza and Porchetta and The Dolphin.

Hinckfuss is also developing a flagship for Paddington’s Oxford Street and working towards opening a beach club in Santa Monica, California next year.

While MCM Beach Club is temporary, Hinckfuss is serious about opening a seaside showroom in the future. He’s testing the Bondi waters first.

MCM Beach Club will be open until March this year.