One owns a design agency and the other is an urban grower. Between the two of them they’ve built some of Sydney’s leading brands and most abundant gardens. 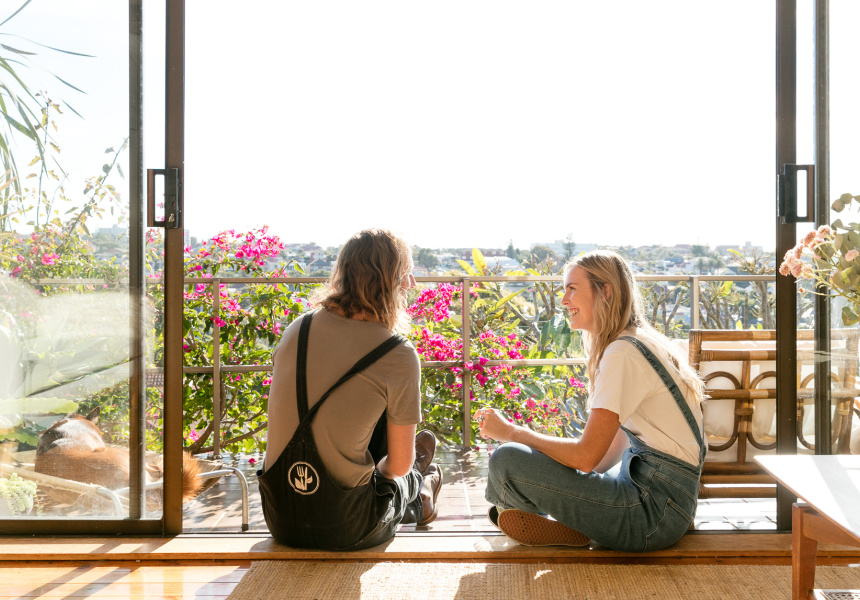 It’s the middle of a busy weekday when we meet Tess Robinson, Byron Smith and their affectionate kelpie, Rainey, in their sunlit home in Bronte. The pair are fresh-faced, energised and spirited, even though they’ve just raced home between back-to-back jobs and looming deadlines.

On top of that, Robinson is moving her agency, Smack Bang Designs, to a larger office space in Surry Hills. She was 22 six years ago when she started Smack Bang, which works with business owners across industries to build their brands. Now she runs a team of 15 staff and is responsible for the design portfolio of hundreds of brands and businesses around the world (P.E Nation, Orchard St. and Elle Macpherson Body to name a few).

Smack Bang’s Instagram account gives the impression the agency has a thriving workplace culture, and when we ask Robinson about this she acknowledges it’s her priority. “It’s always been a by-product of who I am, I think. I don’t want to go to work and not know my employees. I want to have an environment at work that I genuinely love going into, and I want that for everyone, so I have tried to create somewhere that I felt was really fun to be,” Robinson says. “It is important to constantly revisit and it does get harder as the team gets larger, but it pays off as we have almost zero staff turnover and the team put their energy and passion into each project we take on.”

This last comment seems especially relevant for Robinson herself, who recently launched a second business, First Flight Studio, which offers a design template service for websites. She also says she’s in the process of launching an entrepreneurial magazine with a friend.

“I always say to Tess that she will either be dead or retired by the age of 30,” Smith says, smiling. “So she’s only got a couple of years to go.” They both crack up. “She is such a hard worker, at any given time she has a project brewing.” Robinson grew up on the north coast and Byron on the south coast. The pair met serendipitously at a music festival in Brisbane and made the decision to move to Sydney nine years ago.

After making the move, Smith had a spell studying Environmental Science and stumbled upon an opportunity to start gardening out the back of Three Blue Ducks in Bronte, growing some food for the restaurant and cultivating its kitchen garden. He was inspired by this idea that he could have an outdoors job in the city growing food and sharing how you can keep bees, chooks and vegetables in small spaces. Over the past few years his business, Urban Growers, (designed by Smack Bang, of course) has evolved into a company that helps small businesses, residential and corporate clients to do just that. He has installed green spaces at (now-closed) Kitchen By Mike and Koskela, and has implemented rooftop gardens and workshops for corporate companies such as Macquarie Bank and Qantas.

The pair is also working on a book together – a guide to growing food in the city with corresponding recipes. “We’re only including things that are genuinely accessible and achievable for urban dwellers. We’ll focus on 50 plants and roughly the same amount of recipes,” Smith says. “Things that we know you can grow, get a harvest [from] and cook something fairly easily with.”

But they’re not finished yet. “On that note, Byron and I have also been working on a brand new business which will focus on selling and hiring indoor plants for spaces and events.” So far, that makes six separate business projects the couple are now building between them. “It’s addictive to put ideas into action,” Robinson says. “Especially when you have a branding agency, there is infinite potential to test it,” she says, laughing.

It’s an important dynamic for the couple, the push and pull of generating ideas together and supporting one another’s work. Robinson is “big picture” and Smith is “attention to detail”, he says, and therein lies the answer to how on earth the two of them manage to get so much done.