We speak to the photographer-architect duo that dreams of building a house by the ocean. 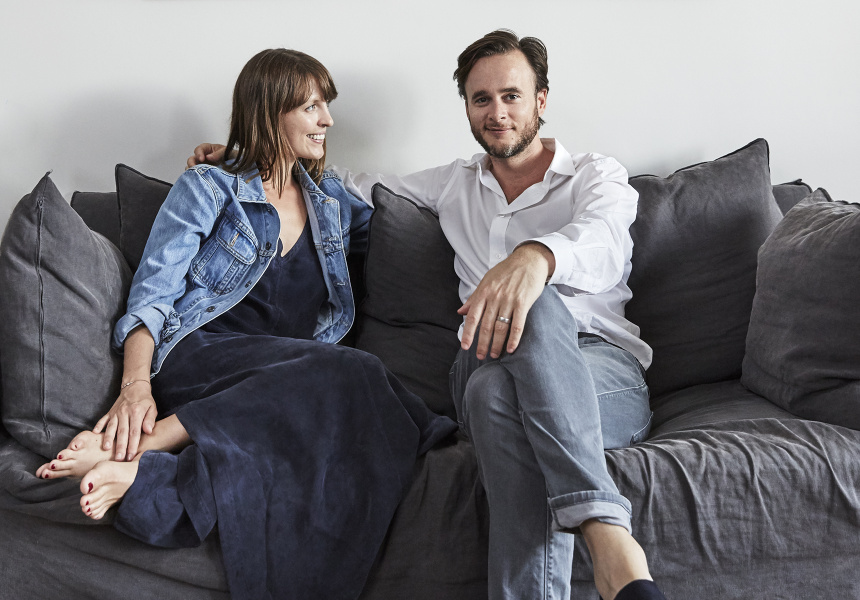 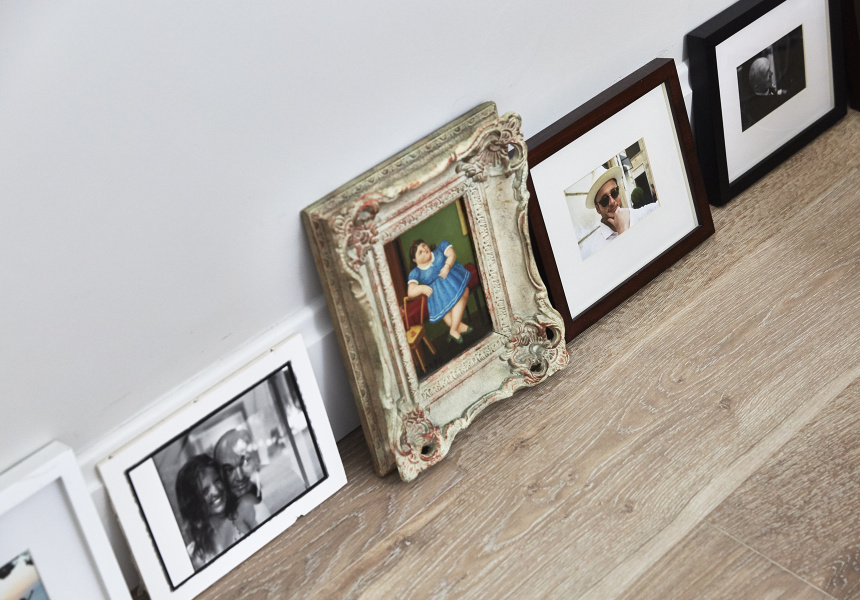 When mutual friends introduced Kelly Geddes and Daniel Boddam to one another, there was immediate chemistry. It’s evident still when you spend time with this pair, and observe their life together.

A couple for six years, and married for four, Geddes and Boddam live in an Art Deco apartment in Bondi. They renovated it: knocking down walls to open the space up and decorating in a cool palette of grey, white and sand. And even if they can’t see the sea, they can hear it.

They’re both seasoned renovators, and the result here is a combination of their handiwork. Boddam is an architect who runs a studio under his own name, and Geddes is a photographer who works across portraiture and behind-the-scenes shoots for fashion brands. She’s also becoming increasingly interested in landscape photography. A pair of seascapes, which Geddes shot in Indonesia while on a work trip with Boddam, hangs on the wall in the lounge, opposite two studies of clouds. Boddam picks out how their tones are mirrored in the couch and cushions below. “It was all designed to blend in and relate to each other,” he says. “Most of [the studio’s] work is fairly textural and monochromatic, and Kelly’s artwork complements it nicely. We’re both trying to achieve a similar sort of style in our work: considered, simplistic.”

They collaborate closely, too. Geddes shoots all the photography for Boddam’s practice; the two disciplines in themselves bounce off each other well. “Architecture is all about light, and photography is as well,” says Boddam.

Geddes and Boddam both grew up with creative parents who also collaborated with each other. Geddes’s mother is the photographer Anne Geddes; famous for her photos of babies incarnated as sunflowers, bumblebees, cabbages etc. Her dad, Kel, was instrumental in marketing Anne’s work internationally.

Geddes – who moved to Sydney from New Zealand aged 18 to study photography at COFA – grew up around her mother’s studio. When she was older, she was “managing the studio, coordinating shoots,” she says. “I’ve grown up with [my mum’s work] all my life, which is nice to have in the background. I’ve been inspired by her style, but I’ve gone on and progressed into my own.”

She’s passionate about portraiture and is branching out into more travel and lifestyle photography. “I really like that intimacy and simplicity of shooting, and that connection with people,” she says. “And [I feel] the same about that connection to the landscape.”

Boddam’s work connects closely to landscape, too, and his studio has worked on so many beachside projects that it has become his calling card. It’s been a natural evolution, he says. “I grew up in Mosman, so we do a lot of houses there. That expanded to the eastern suburbs, and now we’re in Palm Beach and doing a great new house in Austinmer.”

The house in Austinmer is being built from scratch. While the studio works on many renovation projects, he prefers this way of working. “It’s the ability to rethink everything from the ground up,” he says. “The way it integrates with the landscape and natural light.”

Boddam’s parents are both architects who ran a studio together. From his dad he inherited a modern sensibility, and from his Venuezlan mother – who led the studio’s interior designs – a rich, textural aesthetic. His parents’ integrated approach led Boddam to create a holistic studio himself: he’s as comfortable dealing with bricks and mortar as he is hand-glazed Moroccan tile finishes.

His parents also instilled in him a love for furniture design. He launched his first collection this month, and in doing so, he’s fulfilled a childhood dream. “Ever since I was a kid, my parents introduced me to architects who did furniture design,” he says. “And I fell in love with furniture. But then I realised that all the best designers – in my humble opinion! – were architects. So I’ve been waiting for the right time to do it.”

The collection is called Monument, and re-imagines ancient architecture through modern design. There’s a dining table inspired by Chichén Itzá in Mexico, and a coffee table – which sits between us in the lounge – inspired by the Pantheon in Rome.

The couple has been in this apartment for a year now, and while Geddes is quite comfortable, Boddam already has ideas for a new project. And will they build their own house one day? “Absolutely,” says Boddam. “I always dream of building us a house somewhere. Somewhere by the sea.”