The first public tours of White Rabbit Gallery owner Judith Neilson's home are on this weekend. 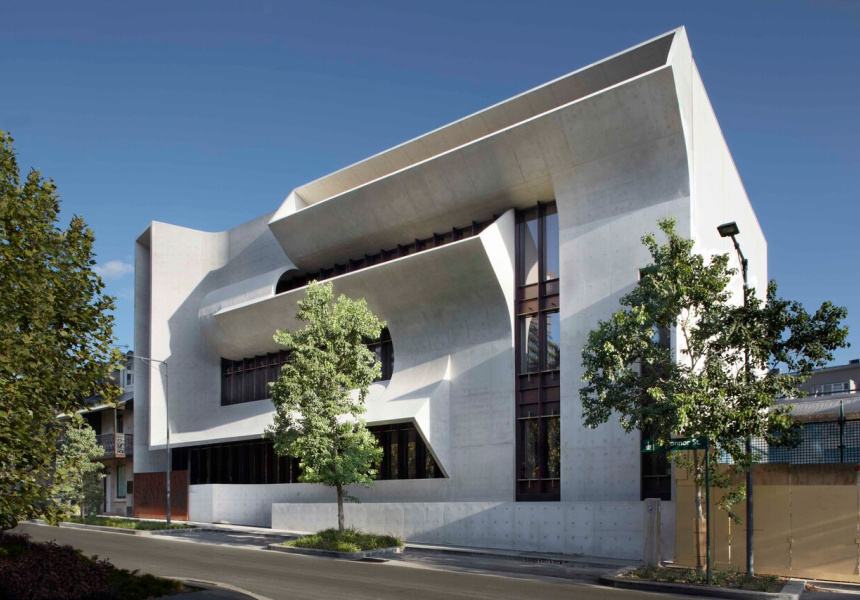 When art collector and philanthropist Judith Neilson engaged architect William Smart to design her home, she told him she wanted an extraordinary building that would last 100 years.

“It’s the phone call you dream of,” says Smart of Smart Design Studios. “When someone says, ‘Let’s do something fantastic together’ and the brief also talks about aspirations, longevity and quality rather than details like the number of bedrooms and bathrooms, it really is a remarkable project.”

The result of that brief is Indigo Slam, a masterful piece of architecture created in response to the rare opportunity to add a large residence (Indigo Slam can be seen easily from a plane) to Chippendale.

The building has been described as “a piece of sculpture to be lived in” on its profile on the Smart Design Studio website, and features a façade of white circular and linear concrete forms. The public has the rare opportunity to step inside it when four intimate guided tours, each led by Smart, are held on the closing day of the Sydney Architecture Festival.

“We met regularly for years and worked through it all room by room, so by the time it was finished we knew exactly what the house needed. Judith was very interested in even the smallest details and most of the time, when given the choice, she would choose the most sustainable and durable finishes.”

A balance of grandeur and modesty, Indigo Slam features serene living spaces and monumental halls to create a dynamic spatial interplay of spare interiors in which the main decorative element is light. A cavernous stair hall is exciting and inviting, and intimate living areas are a counterpoint to the dramatic spaces. “Judith also wanted a formal dining room where she could seat 60 people to discuss ideas and issues she is passionate about,” says Smart.

The curves and planes of the façade act as screens to provide privacy and shade to the interior spaces, including a sky-lit kitchen and study. Bedroom suites occupy the first floor, which overlooks a park to the north. All internal finishes are modest and pared-back; floors are brick-paved and concrete is used throughout.

Hand-operated rather than digital mechanisms were a key stipulation in the brief, such as oversized vertical timber blinds that retract by pulling on chains and awning windows operated by geared brass winders.

Accommodating a number of Neilson’s artworks was another important aspect of the brief. “There were a few key pieces that the house needed to accommodate, and a couple of other pieces that were purchased along the way,” says Smart.

As for the name of the house, that too was part of the brief. “Judith had a read a crime novel of that name by an author called Robert Crais,” says Smart. “It was as simple as that she liked the name.”

The tours will take place as part of Sydney Architecture Festival on Monday October 3 at 12pm, 1pm, 2pm and 3pm. Tickets are available here