This article is produced by Broadsheet in partnership with Art Gallery of New South Wales.

The annual Archibald Prize exhibition offers a unique snapshot of Australia – even in the very strange year that is 2020. In partnership with Art Gallery of New South Wales, we speak to its curator about why the competition endures. 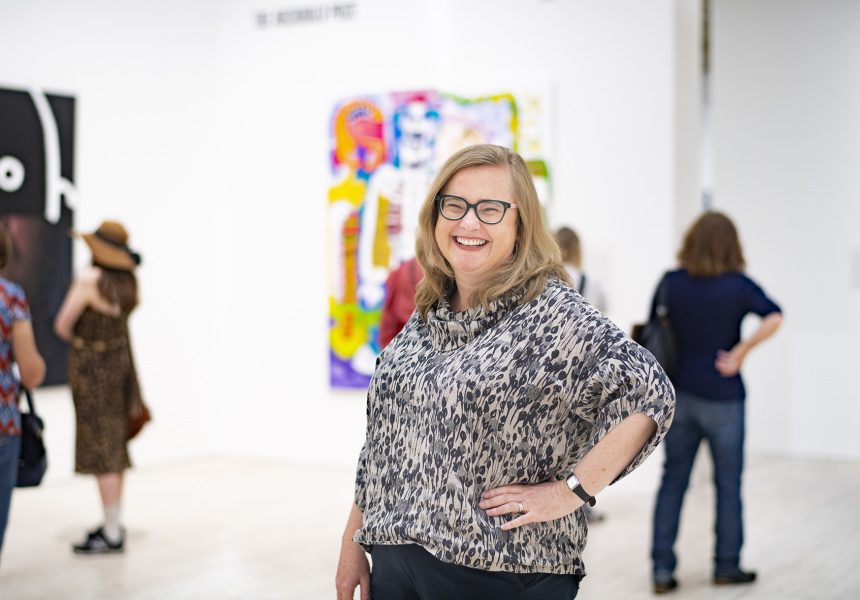 The Archibald Prize and its ensuing exhibition of finalists remains one of the most enduring events on the cultural calendar. With 2021 set to see the prize mark it’s 100th birthday, Anne Ryan, the portraiture exhibition’s current curator, says the key to its popularity is simple.

“It feels very familiar,” says Ryan. “Most people understand pretty instinctively what a portrait is. It’s about us. As human beings, we are interested in looking at ourselves and each other. So it’s one of the few art events that cross over into a broader consciousness.”

It’s also unfailingly democratic. “All sorts of people enter it,” she says. “It’s open to anybody as long as they’re Australasian. There are no restrictions on whether you’re a famous professional artist or a Sunday painter or a young person.”

This year’s exhibition of the Archibald Prize finalists is currently on display at the Art Gallery of New South Wales (AGNSW). It’s showing alongside entries for the Wynne Prize (awarded to the best landscape painting of Australian scenery, or figure sculpture) and the Sulman Prize (awarded to the best subject painting, genre painting or mural project in oil, acrylic, watercolour or mixed media).

“It’s a very important part of our annual mix of offerings at the Art Gallery of New South Wales,” says Ryan. “It’s also a really fun exhibition to work on.”

How it hangs
Ryan does not select the works – that task falls to the gallery’s board of trustees, who judge the prize each year. Ryan’s role is two-pronged: first, she helps the judges settle on the number of works to appear in the final selection. It’s “usually around 50,” she says, “but that can vary from year to year depending on the size of the works they have selected.”

With the final selection decided upon, Ryan’s next task is “to make sense of that selection for the public. I hang the works in a way that suggests connections, a narrative, and a way of looking at the works that’s harmonious for viewers as they come through the show.” Ryan’s task is to ensure “each work gets a chance to express itself, so it doesn’t get lost, hidden, or shouted down by a work that has a louder presence.”

How it wins
A prize-winning portrait shouldn’t necessarily serve as a simple likeness of its subject, but instead offer insights into their character. Ryan says the judges are looking for “great works of art, but also great stories and stories that feel relevant to them in 2020.”

Entrants must adhere to a handful of guidelines. The portraits’ subjects should preferentially be individuals distinguished in art, letters, science or politics. Artists must also complete works within a certain timeframe, which gives the exhibition a sense of immediacy. “Over the years, the kind of people who have a profile and get a lot of attention has changed,” says Ryan. “It feels very current.”

This year’s exhibition
Western Arrernte artist Vincent Namatjira won the 2020 Archibald Prize for his painting Stand strong for who you are, in which he appears with Aboriginal AFL legend Adam Goodes. “Some years it’s hotly contested, and other years it’s not,” says Ryan. “This year there was a broad consensus.”

She says Namatjira’s portrait of Goodes “felt very topical in a year that has had huge upheaval, including the international Black Lives Matter protests. It had a great presence, a great power, and it tells a great story.”

Actor Meyne Wyatt’s striking self-portrait – a Covid-19 project and, remarkably, his first attempt at painting in a decade – won the Packing Room Prize, judged by the gallery staff who receive, unpack and hang the entries.

The Archie Plus
In 2020, visitors to the gallery can also engage with Archie Plus, which runs alongside the Archibald, Wynne and Sulman Prizes 2020 exhibition until January 10, 2021. Celebrating people, portraiture and the power of community, it’s a concept that grew out of the Covid-19 lockdown, when the AGNSW had to come up with new ways of connecting with audiences.

Featured projects in Archie Plus include Avatar Towers, an installation by artist Ramesh Mario Nithiyendran, which sees more than 60 bronze and clay sculptures glazed in bright colours greet visitors in the AGNSW entrance vestibule. Filling the largest single wall at the gallery is Love owls and mermaids singing in the rainbow pop, a mural by Studio A artists Mathew Calandra, Emily Crockford, Annette Galstaun, Lauren Kerjan, Jaycee Kim, Catherine McGuiness, and Meagan Pelham celebrating the power of love.

The ambitious program includes art, music, performance and dance. “It’s free and easily accessible,” says Ryan. “It’s a hybrid kind of program that lights up the gallery, so when people come to see the Archibald Prize, there are all sorts of other things for them to experience as well.”

The Archibald, Wynne and Sulman Prizes 2020 exhibition and Archie Plus are on now until Jan 10 2021. Timed tickets are available to purchase online. Visitors are strongly recommended to pre-book their ticket in advance to avoid disappointment, as it is expected to be popular over the summer holidays. See times and ticketing details.

This article is produced in partnership with the Art Gallery of New South Wales.

This article is produced by Broadsheet in partnership with Art Gallery of New South Wales. Learn more about partner content on Broadsheet.