Who is Jason Phu?

This emerging Sydney artist is causing lots of excitement, starting with his Sulman Prize win. Jason Phu in front if his work 'Lisa has a much more pleasant face than Glenn. She also doesn’t sing horribly while playing a guitar or try to put a cat up a tree while I’m painting her' Sulman Prize-winning work: 'I was at yum cha when in rolled the three severed heads of Buddha: Fear, Malice and Death' by Jason Phu 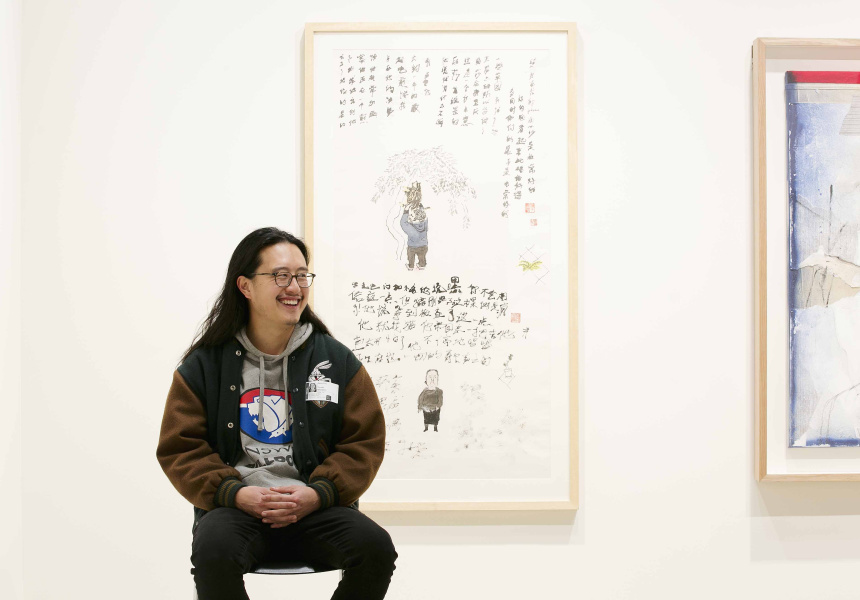 Jason Phu in front of his Archibald entry 'Lisa has a much more pleasant face than Glenn. She also doesn’t sing horribly while playing a guitar or try to put a cat up a tree while I’m painting her'

Wandering through the Archibald, Wynne and Sulman Prize exhibitions, you may wonder who the artist behind not one but two quirkily titled paintings is. There’s a portrait of Carriageworks director Lisa Havilah titled: Lisa has a much more pleasant face than Glenn. She also doesn’t sing horribly while playing a guitar or try to put a cat up a tree while I’m painting her; and the Sulman Prize-winning work, I was at yum cha when in rolled the three severed heads of Buddha: Fear, Malice and Death.

Both are Chinese ink on paper; both are done in a deliberately naïve and eye-catching style; and both are by emerging Sydney artist Jason Phu.

It’s remarkable that an emerging artist was named a finalist in both the Archibald and Sulman prizes. To actually win the prestigious 2015 Sulman Prize, judged by former Archibald winner Lindy Lee, bodes very well for 25-year-old Phu.

Despite the win, the accompanying $40,000 prize and the media hype around the competition, Phu insists he's only just beginning. “It’s a good one-off payment but I still have a long way to go,” he says.

This is the second year in a row Phu has had a portrait hung in the Archibald Prize. Last year’s painting depicted a fat, snoring Ray Hughes (gallerist) and his son and gallery owner, Evan (who represents Phu). It had a similarly whimsical title: Evan on a Sunday morning at the gallery having a ginger tea with some old fat snoring man and some lady pushing someone's annoying crying baby around in a blue pram, and no, you can't smoke here mate.

The self-described Chinese/Vietnamese/Australian artist graduated from the College of Fine Arts at UNSW in 2011 and was snapped up by the Hughes Gallery two years later. His artwork often depicts the mixed cultural identity of Australians, addressing what he terms his own “cultural dislocation”.

Born in Sydney to a Chinese mother and Vietnamese (ethnic Chinese) father, Phu grew up speaking Mandarin in an environment immersed in Chinese values and culture. Outside of the home Phu’s life has been typically Australian.

“I don’t consider myself just Australian, I’m a Chinese person born in Australia. It’s a unique perspective,” he says. “This is the place I was born, raised and live, but I’ve never felt fully comfortable here. And that’s dislocation. It’s coming to terms with that and realising I never will feel fully at home. But not in a bad way – having the dual perspective has huge advantages, too.”

His sense of displacement finds an outlet in his artwork, often fuelled by humour. But behind the jokes and the self-deprecating comments is a skilled artist with something serious to say.

His Sulman Award-winning work has a gentle dig at the fashionable Sydney Sunday meal: yum cha – he’s never eaten yum cha in China – and the rise of Buddhism, or more specifically statues of Buddha’s head in Australian gardens.

Phu majored in printmaking in his undergraduate degree and honed what he refers to as his “Chinese painting” style with a calligraphy teacher here in Sydney and during regular trips to China.

He may only be “messing around” but people are taking notice. Phu regularly shows in group exhibitions locally and has exhibited in Taiwan, Thailand and Chicago. Nonetheless, he still considers himself an emerging artist with a way to go before he’s officially made it, pointing out his current job as a custom printer at Cicada Press will continue to be his main form of income.

Interestingly this year’s Archibald Prize competition featured more emerging artists than ever before. “I think it’s great,” Phu says. “The changing of the guard, getting fresh blood into the competition. Then when we become old and pointless you change us around.”

At the end of the year Phu will relocate to China for a couple of years, giving himself the chance to formally learn Chinese calligraphy and immerse himself in the world of great Chinese artists.

The titles of his paintings are more akin to a thought bubble than a serious art title (something many “serious” artists grumble about needing to do in the first place). “I don’t like putting ‘untitled’, and if I can put more information in my title, I will. People always want to know the story behind it so why not just give it to them? Whatever people want.”