The Opera House and Harbour Bridge get all the attention, but did you know western Sydney is home to some of the most significant architecture in Australia? From Breuer to brutalism, here are five of the area’s most incredible buildings, as told by professor Chris Knapp, Chair of Architecture at Western Sydney University. 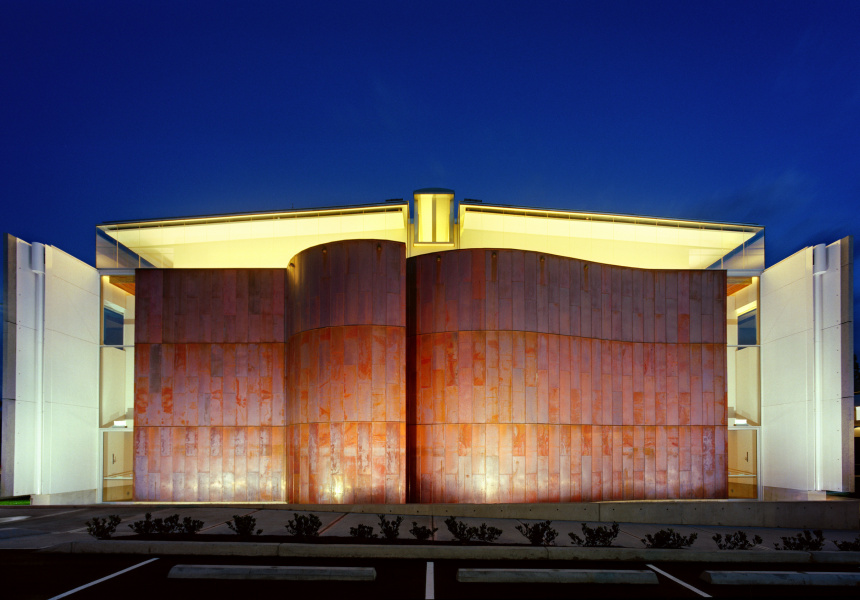 Torin Building
A backstreet in Penrith is an unlikely place for the only Australian example of work by renowned modernist architect Marcel Breuer. But sure enough, here lies the Torin Building, which also counts local star Harry Seidler as associate architect. Breuer is best known for the Whitney Museum of American Art’s Breuer Building in New York and UNESCO’s headquarters in Paris. Despite its top-shelf pedigree, this building’s past is strictly industrial: it was one of a suite of nine buildings Breuer designed for the Torin Corporation, a manufacturer of heating, cooling and ventilation componentry. The streamlined edifice of striking cuboid forms with an exterior of rough-textured concrete is architectural gold in the suburbs.

After 23 years of planning, fundraising and a legal battle in the high court, this 99-domed mosque by Candalepas Associates was finally unveiled in 2018 and promptly picked up the prestigious Sulman Medal for Public Architecture. The non-profit Australian Islamic Mission (AIM) brought the $12 million building to fruition through donations, grants and community loans. Displaying the quiet elegance of single-material concrete design to serene effect, the mosque has been heralded as the new wave of brutalist architecture, already a much-loved movement in Sydney (to some, anyway). Look closely at the domes and you’ll discover the 99 Arabic names for Allah inscribed in fine gold.

This building on the banks of the Parramatta River has stood through some of the most significant social changes in Australian history. Following its construction in 1818, the orphanage was used to educate destitute young girls and afterward served as a psychiatric hospital. It was the first welfare institution established in New South Wales. Very few public buildings of this age and size have survived – this is the oldest three-storey building in Australia, older even than Hyde Park Barracks. The brick structure was modelled on the Scottish childhood home of Elizabeth Macquarie, the second wife of former New South Wales governor Lachlan Macquarie. Nowadays it’s a fitting home for the Whitlam Institute, a public policy think tank that’s part of Western Sydney University.

Despite housing four churches in its 175-year history, the site of the current St Patrick’s Cathedral won’t be reincarnating anytime soon. Revered Italian-Australian architect Romaldo Giurgola (who also designed Parliament House in Canberra) led a 2003 rebuild in the wake of a devastating arson attack in 1996. The new design respectfully incorporates elements from the earlier 1850s church and 1880s tower, both of which survived the fire. Conscious simplicity informs the vast, naturally lit spaces inside, and fine sculptural art works of metal, timber and stone seem to float in the air. With room for more than 800 seated worshippers, this is modern architecture on a grand, awe-inspiring scale.

In Darug, the language of the traditional landowners in this area, “yandhai” means both “river’” and “walking in the path of past and present”. The word perfectly describes the long-awaited pedestrian bridge that opened in October last year, providing passage across the mighty Nepean River. Local engineering firm Seymour Whyte designed the structure in collaboration with French specialist Freyssinet, for a reported $49 million. It’s now the longest single-span pedestrian/cyclist bridge in Australia, balancing 700 tonnes of steel across 270 metres. This makes for an interesting contrast with the adjacent, heritage-listed Victoria Bridge, completed in 1867. Visit at early dusk to see the rich, ochre-coloured trusses glowing under gentle spotlights.

Professor Chris Knapp is the Chair of Architecture at Western Sydney University.