Want More Art In Your Home? Here’s Your Answer

Whether you’re in the market for a David Hockney or keen to discover the next wave of artists, Sydney Contemporary has you covered. 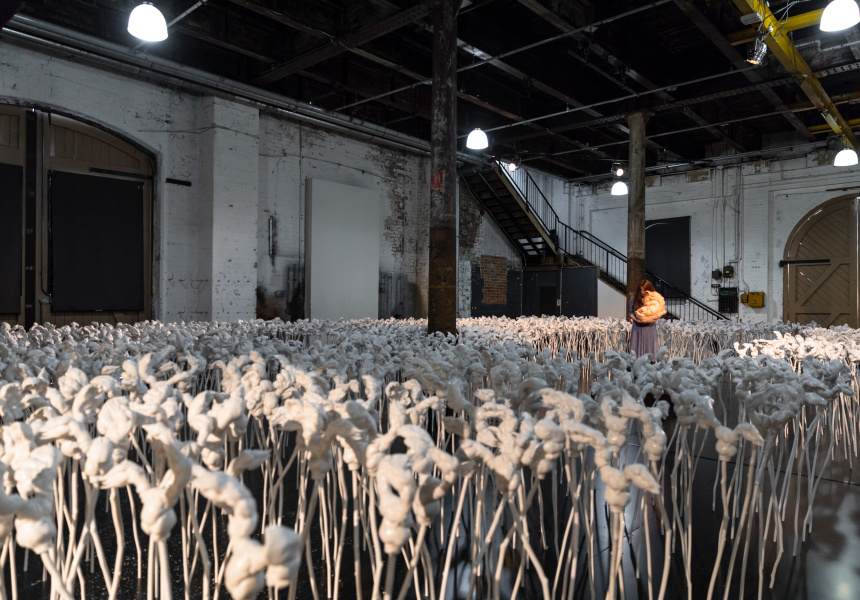 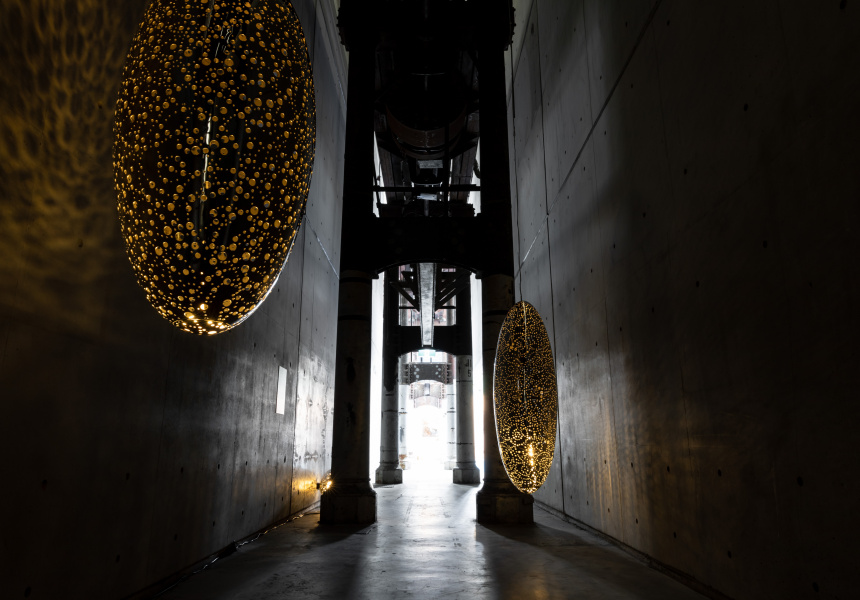 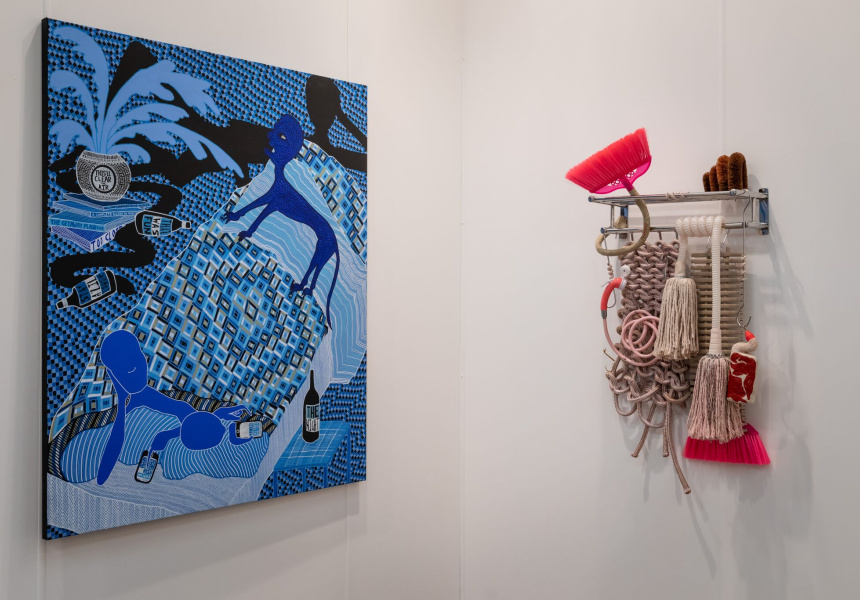 The words “art” and “traffic” aren’t often used in the same sentence but so overwhelming were the crowds at the inaugural Sydney Contemporary art fair in 2013, they created a throng of people that was impossible to navigate.

“People still talk about it as the best party in Sydney but also the first art traffic jam. We had a tsunami of people arrive – answering the question was Sydney ready for an art fair – but it got so crowded it was impossible for galleries to conduct business and for people to see the art,” Barry Keldoulis tells Broadsheet.

The Sydney Contemporary fair director says they’ve learned some valuable lessons since then – although the buzz around this year’s fair may mean they need traffic wardens on stand-by.

Now in its fourth edition, Sydney Contemporary is arguably Australia’s premier art fair, showing the breadth and depth of artistic talent from Australia, New Zealand and further afield, much of it exhibited for the first time. Here’s the low-down on what you should see and do.

Art
This year you can catch the first glimpse of new bodies of work from established artists such as Ben Quilty, Tim Storrier and Tony Albert; along with existing works from Brett Whiteley, Emily Kame Kngwarreye, Tracey Moffatt and Sidney Nolan. High-profile international names include Jean Dubuffet, Tracey Emin, Damien Hirst and Julian Opie, who will be exhibiting alongside the local art scene’s most exciting emerging talent.

Held over four days throughout Eveleigh’s Carriageworks, this year’s event hosts around 80 galleries who hail from six continents and represent artists from 32 countries. It includes mediums of painting, drawing, sculpture, installation, video, prints and works on paper.

In addition to prestigious local galleries, including Sydney’s Roslyn Oxley9, Sullivan+Strumpf and Melbourne’s Tolarno Galleries and ARC ONE, the fair will for the first time welcome Pace Gallery (New York, Hong Kong and London among others), Flowers Gallery (London and New York) and Singapore’s Yavuz Gallery to its international line-up.

Keldoulis says the fair deliberately aims for a diverse range of artists who will have broad appeal, from major collectors and state gallery directors and curators, to high-end private collectors and those keen to dip their toe in the art market.

This year’s fair may see works sell for more than $1 million – “there is a Jean Dubuffet sculpture worth a few million dollars that I think would look great in your garden,” jokes Keldoulis – while others from artists such as Nolan are expected to sell in the hundreds of thousands range. And then there’s works from the likes of British painter David Hockney that may surprise discerning collectors.

A highlight will be The Field, by acclaimed Melbourne multimedia artist Patricia Piccinini, a large-scale installation of 3000 genetically modified “flowers” created for Queensland’s Gallery of Modern Art that will be reconfigured for Carriageworks. It is the first time this work has been seen outside Brisbane. “She’s a fantastic artist; this is her first work looking at the crossover mutation between the animal and plant world. She’s also incredibly articulate and will be doing some talks on her work,” Keldoulis says.

Those keen to know who our future Hockneys and Kngwarreyes are would do well to check out young Sydney artist Kai Wasikowski (Isabel Rouch Projects); ARC ONE’s Prue Stent and Honey Long, whose photography explores the human form in landscape; the Egg & Dart’s India Mark; Chalk Horse artist Alex Standen; and Stanley Street Gallery’s Jackson Farley; alongside Indonesian painter Zico Albaiquni, who’s headed for the Asia Pacific Triennial in Brisbane in November. “They are all young artists to keep an eye on,” says Keldoulis.

Food and drinks
Sydney Contemporary will host pop-up restaurants and bars for the all-important refuelling. Made by Merivale brings its CBD Work in Progress, along with a dim sum outpost under the guise of revered dumpling master Eric Koh of Mr Wong and Queen Chow.

There will be a Handpicked Wines Art Bar featuring leading artist Karen Black, as well as a vodka bar.

And more
If you prefer some sides with your art, there is also a robust program of talks, tours and performances.

Spare some room and time for the curated elements of Sydney Contemporary, designed by experts including Performance Space CEO Jeff Kahn who has put together the Performance Contemporary program with Tulleah Pearce. The director of Melbourne’s Ian Potter Museum Kelly Gellatly will curate moving-image art for Video Contemporary; and independent curator and writer Nina Miall has devised Installation Contemporary.

And if you want to go off-site, three giant art installations by top, internationally-recognised artists Callum Morton, Mel O’Callaghan and Cameron Robbins will be at Barangaroo. There you’ll find a giant Donald Trump head protruding from the footpath.

A subsection, Future Contemporary, is for emerging galleries (who pay a slightly subsidised fee to exhibit) and provides a snapshot of the next generation of gallerists. This year the fair will again host Art Money: interest-free financial loans to buy art, ranging from $750 to more than $50,000.

Last year’s event attracted 26,000 people – who bought an impressive $16 million worth of art – and this year shows no signs of abating. “That equated to nine or 10 million dollars going straight back to the artists, which is what it’s about really, supporting them so they can continue to make work,” Keldoulis says. “So that’s very exciting.”

Sydney Contemporary is at Carriageworks from September 13 to 16. 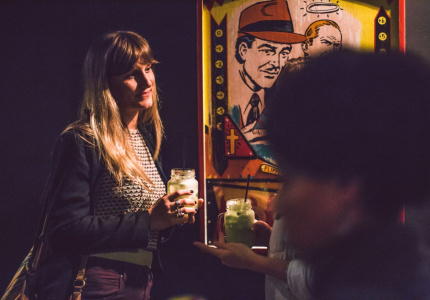